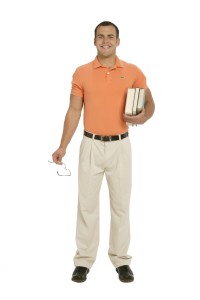 Boys are now much more likely than girls to drop out of college.

According to a recent Lifezette article,

Over the past decade, about 30 percent of young men have dropped out of college during their freshman year…For those who stayed, 38 percent completed their bachelor’s degree in four years and 58 percent did so within six, noted the National Center for Education Statistics. Many researchers say the disappointments and struggles that male college freshmen are encountering have not changed much through the years, but many of today’s young men are not prepared to deal with these challenges.

The article goes on to delineate 6 reasons why boys struggle in college:

Take a deep breath. The deck may seem stacked against boys, but there’s a lot you can do as a parent or educator to put boys on the path to college, career and life success. Want your guy to succeed in college and life? Do this:

Let them struggle. As author and educator Jessica Lahey so eloquently writes in her book The Gift of Failure, parents’ and educators’ desire to help children succeed has too often manifested in overprotectiveness and spoonfeeding. If we want our children to grow into adults who can handle complicated situations and rebound from setbacks, we need to let them struggle through situations and setbacks.

Instead of swooping in when your boy experiences a challenge — whether your son is a 5-year-old tying to tie his shoes or a 16-year-old recovering from a heartbreak — give him a chance to work through the problem on his own. He may still need your support and guidance, but then, support and guide. There’s a big difference between talking your son through the process of tying his shoes, or even helping him form a loop, and doing it yourself. Similarly, there’s a big difference between talking with your teenager about how he can express his feelings and calling up his ex to tell her how much he really cares about her.

Boys who gradually take on more and more responsibility for their lives and decisions will be well-prepared for college and adult life.

Refuse to accept stereotypes. It’s perfectly OK to accept boys’ interests, even when those interests –sports and video games, for instance — appear stereotypical. It’s OK to welcome boys’ energy and physicality because you know that boys, in general, do better when they’re moving. It is not OK to accept or allow your boys to buy into restrictive stereotypes of boys, men and masculinity. Your boys need to know that you don’t accept or buy into the modern myth that boys are stupid or somehow less capable than girls. They need to know that boys and girls can be kind and compassionate, and that their worth as a male has nothing to do with their physical appearance or sexual prowess.

How do you get those messages through to your boys? Talk to them about media depictions of males and females. Point out examples of limited and stereotypical thinking. Call your boys on any use of sexist language. Expose your boys to all kinds of men and women, so that they know, on a deeply personal level, that there’s no right or wrong way to be a man or woman.

Teach your boys how to help themselves. Colleges and universities offer all kinds of services for students with learning disabilities and medical and psychological needs. But at that level, the onus is on students to seek help. In fact, according to federal laws, it’s discriminatory for a college to assume a student needs help, even if the need appears obvious.

Odds are, you’ve spent a lot of time and energy advocating for your boy. Whether he has autism or ADHD, dyslexia or an off-the-charts IQ, any help or services he’s gotten at school or in the community has likely been due to your fierce advocacy. That’s great! But before boys leave home, they need to know how to help themselves. They need to know who to contact and how to express their needs. Ideally, they’ll also know what supports and services are most useful to them.

You can help boys develop these skills by gradually placing more responsibility into their hands. Whenever possible, boys can (& should) participate in individualized education planning meetings at school. Older boys can be taught how to make phone calls to schedule appointments, and should be encouraged to do so. It’s also helpful to talk about sources of help and support — things such as college health and counseling centers, community counseling and offices of disability and student support.

Get real. Your kids and mine can all point to a YouTuber who is making millions of dollars simply by posting videos on YouTube. As the Lifezette article points out, many boys “believe they can follow in Bill Gates’ or Steve Jobs’ footsteps and make a fortune without a college degree.”

As much as you want to protect your children’s innocence and provide them with a sense of security, it’s important to not shelter them from the realities of life. Talk about the cost of housing and the unemployment rate. Share articles and statistics regarding employment opportunities and lifelong income for college grads vs. high school grads. (According to this Forbes article, the difference amounts to $830,000.) It’s not always easy to talk about money with our kids, but sharing details of your personal financial situation can be incredibly helpful.

Back off. According to the Lifezette article, if a student drops out of college and returns home, “it is essential that parents allow their child to learn how to deal with disappointment on his own. The days of navigating every aspect of that child’s life must end to ensure that he will learn to fend for himself.”

I say it’s best to back off well before then. Give your child as much control as possible over his own life. When he struggles, offer information and support instead of solving his problem. Support his attempts to solve his own problems, even if you can see — with your years of experience — that another approach might be more successful. He needs to learn what works for him, and most boys learn far better from trial and error than they do from parental lectures.

Above all, remember that his life is his life, not yours. Ultimately, your son, not you, is responsible for the choices he makes in life, and for creating a life that brings him happiness and satisfaction.

When you have a son, it’s important to build a … END_OF_DOCUMENT_TOKEN_TO_BE_REPLACED

DIY activities are one way to counterbalance … END_OF_DOCUMENT_TOKEN_TO_BE_REPLACED

When you have a son, it’s important to build a beautiful, meaningful … END_OF_DOCUMENT_TOKEN_TO_BE_REPLACED

Parenting is stressful. Wonderful -- and stressful. As a parent, you … END_OF_DOCUMENT_TOKEN_TO_BE_REPLACED