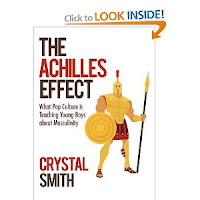 You know that scene in the Wizard of Oz where Dorothy spies the man behind the curtain? That’s kind of how I feel after reading The Achilles Effect.

After reading the book, it’s impossible to miss the gender-oriented messages that are everywhere. Case in point: I had a few minutes to waste before interviewing Achilles author Smith earlier this week. To pass the time, I clicked on Google news. In less than 2 minutes, I stumbled across a story about a new potato chip that’s being marketed to males. The bag is black; the product is bold and spicy. And it’s going to be launched at a party featuring MAXIM magazines Hot 100 Girls. What does that tell our sons about what men are expected to be?

But there’s hope. Parents remain powerful influences in their sons’ lives, and there’s much we can do to counter the stereotypical message that our boys are receiving from the pop culture. Here a few suggestions from Chapter 7 of The Achilles Effect:

You want what’s best for your boys. You want to … END_OF_DOCUMENT_TOKEN_TO_BE_REPLACED

Finding the right preschool and ensuring your son … END_OF_DOCUMENT_TOKEN_TO_BE_REPLACED

Image by Art Skoo from Pixabay  One of the most … END_OF_DOCUMENT_TOKEN_TO_BE_REPLACED

Pexels Raising boys isn’t always easy, but it's one of the most … END_OF_DOCUMENT_TOKEN_TO_BE_REPLACED

You want what’s best for your boys. You want to set them up with all … END_OF_DOCUMENT_TOKEN_TO_BE_REPLACED