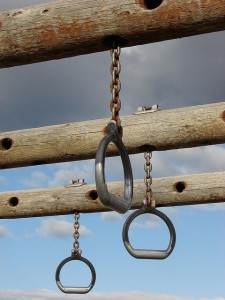 I’m worried about our kids.

Yesterday, I started my day off with an 8 AM meeting with the middle school principal. The topic: playground football. Football (actually, all play involving footballs) has recently been banned from recess at the middle school. I wanted to know why. The answer? Injuries, aggressive behavior and liability.

Keep that answer in mind as you consider the conclusions of a study released today in the medical journal Pediatrics. The study’s title says it all: “Societal Values and Policies May Curtail Preschool Children’s Physical Activity in Child Care Centers.”

The researchers wanted to know why, so they interviewed scores of childcare owners and workers. They identified three main barriers to active play –

-and concluded that, “societal priorities for young children – safety and school readiness – may be hindering children’s physical development.”

Think back to my conversation with the principal. Football was banned from the playground due to injury concerns. During the course of our conversation, I learned that our district’s 4th graders now only get one recess a day instead of two, and that the time that was previously spent on a second recess is now used for extra math practice. Sounds like prioritizing school readiness over play to me.

As a parent, I’m concerned, and not just for my own children. I’m acutely aware that my boys need time to run around and explore. But I also know that all children need opportunities for physical play, and that kid-structured playtime can improve academic learning and social skills. I know that boys, especially, have a competitive, aggressive streak that needs to find a safe outlet, and that learning to manage that streak is an important part of the trek to manhood.

As a licensed nurse, I’m also aware of the potential for injury. Boy #2 played organized tackle football for the first time this year, and believe me, I paid attention to news stories and research about concussions. Like all parents, I want my kids to grow up safe and healthy. But unlike some parents and educators, I’m willing to let my kids take physical risks, because I believe that in most cases, the benefits outweigh the risks.

You see, when I say that I want my kids to grow up safe and healthy, I mean that in a most holistic manner. I value their physical health, but I also value their emotional, spiritual and social health. I want my boys to learn to value and honor their instincts. I want them to learn from nature. And I want them to be adventurous explorers of their world. (For the record, I’d want the same for my daughters, if I had any.)

So while I know that climbing trees is a risky endeavor (they could break an arm!), I let my boys climb. (With some restrictions: the rule at our house has always been that you must be able to get into and out of the tree on your own.) I let them climb because I understand that it’s important for kids to test limits, to stretch their muscles and imaginations and to spend time in nature. When it comes to tree climbing, I personally believe that the benefits outweigh the risks.

Same thing with football. Yes, my boys might get hurt. But I believe that the fun and exercise and enjoyment they get from the game – not to mention the practice of learning to play well with others – exceeds the risk. The odds are extremely good that one of my boys will be hurt in some way while playing football. But the odds are better that any injuries experienced will be minor compared to the benefits they’ll obtain by playing the sport.

Somehow, though, social policies and values have shifted to the point that we, as a society, are more concerned about protecting our children than facilitating their development. Many of the childcare workers interviewed for the Pediatrics study expressed concern about the amount of time their charges spent in sedentary play, but felt pressure from parents to minimize physical play and to maximize academic engagement.

In fact, the study authors conclude that pediatricians (the paper’s target audience) may be able to increase kids’ physical activity by educating parents. “Pediatricians,” they write, “may need to highlight for parents the many learning benefits of outdoor play…and reassure parents that active time does not need to come at the expense of time dedicated to ‘academics’ and ‘learning.’”

I’m sad that it’s come to this – that doctors now have to educate parents as to the importance of active play. But I’m determined to do my part. Check out these posts:

The Importance of Play

Kids as Advocates for Play

Protecting Play: In the Community

The Benefits of Active Play

In Praise of Free Play

Tell me about your reality. What challenges to play do you and your boys face in your community? Do kids in your school district get recess? Do you ever feel pressure from other parents to restrict your childrens’ play? What do you think we, as parents and educators, can do to re-emphasize the importance of play?

20+ years into parenting boys, I feel like I have … END_OF_DOCUMENT_TOKEN_TO_BE_REPLACED

Author Peggy Orenstein has a new book out this … END_OF_DOCUMENT_TOKEN_TO_BE_REPLACED

Many people are horrified at the thought of single … END_OF_DOCUMENT_TOKEN_TO_BE_REPLACED

20+ years into parenting boys, I feel like I have a pretty good grasp … END_OF_DOCUMENT_TOKEN_TO_BE_REPLACED

Author Peggy Orenstein has a new book out this week, Boys & Sex: … END_OF_DOCUMENT_TOKEN_TO_BE_REPLACED