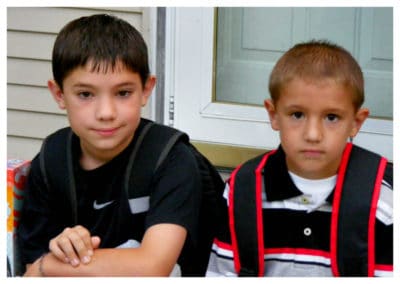 Talk about an article designed to attract my attention.

An article published in The Guardian, a British newspaper, carries this provocative headline and subtitle: “Girls ‘more resilent’ than boys at school: Girls from single-parent families outperform boys in class because they are less affected by parental input, study shows.”

As a divorced parent of four boys, I found the article a somewhat depressing retread of a oft-expressed theory: Boys don’t do well in single parent homes.

The article states that the so-called “gender gap” in education — the tendency for boys to underperform in school, as compared to girls — may be because boys from single parent homes are more likely to have behavioral and emotional problems that carry over into the school setting, while girls don’t seem disturbed by the lack of a two-parent household.

According to the article, “Boys raised outside a traditional two-parent family were more likely to display behavioural and self-control problems in class and were suspended more often…By the time the children were 10 or 11 the “gender gap” between boys and girls displaying behaviour problems in school was twice as big for those brought up by single mothers as those from traditional families.”

When the boys’ dad and I first separated, I quite naturally fretted about the impact of our separation on the boys. (I still do!) Like all modern, 21st century parents, I turned to Google for answers. What I found did not reassure me. Google told me that boys are more likely than girls to become depressed and angry after their parents’ divorce. That they’re more likely to have academic and behavioral problems, more likely to assume blame and increasingly likely to become distanced from their mother.
Now another study tells me that boys in single parents families are all-but-destined for academic failure??

Well, I refuse to believe it. I refuse to believe that our divorce will doom our boys to a less-than life. I know that our divorce affected them — and affected them greatly — but I will not let the divorce be an excuse for academic failure, behavorial problems or relationship issues. I fully, completely, 100% believe that children of divorced and single parents can grow up to become functioning, well-adjusted human beings. And while my ex and I are not perfect, I believe that we’re doing some things to mitigate the effect of our divorce.

Two: When we see a behavioral problem, we address it. Please don’t take this to mean that the boys’ dad and I are model co-parents. We’re not. Most of the time, we barely talk, and our values and beliefs regarding parenting differ. But…we both want our boys to be functioning members of society. We both want our boys to function well in and out of the classroom. And you can bet that if either one of us hears that our sons are acting up in (or outside of school), we will address the issue. Our boys have had counseling; that remains an option, should it be needed again in the future. I also work with the boys daily on basic problem solving, anger management and interpersonal relations.

Three: We support the boys’ interests and educational pursuits. My house is filled with books. The boys’ dad loves to watch educational documentary style shows (think “Ice Road Truckers” and “American Pickers”) with the boys. We also make it a point to weave the boys’ natural interests into our days and the boys’ education. Boy #1 is an avid fisherman; I showed him how to use the library website to access every fishing book within our interlibrary loan system, and his dad helped him get and outfit a simple boat and takes him fishing. #2 loves sports: He plays football, basketball and baseball, and has lots of fiction and non-fiction books about sports. #3 is gettting into robotics, electronics and RC cars. Guess what he got for Christmas? I gotta think that all of that educational support will make a difference for the boys in the long run.
What do you think? Do you think that life in a single parent household dooms boys to a life of educational failure? Or do you think that parenting is more important than household or family structure?
The following two tabs change content below.

When you have a son, it’s important to build a … END_OF_DOCUMENT_TOKEN_TO_BE_REPLACED

DIY activities are one way to counterbalance … END_OF_DOCUMENT_TOKEN_TO_BE_REPLACED

When you have a son, it’s important to build a beautiful, meaningful … END_OF_DOCUMENT_TOKEN_TO_BE_REPLACED

Parenting is stressful. Wonderful -- and stressful. As a parent, you … END_OF_DOCUMENT_TOKEN_TO_BE_REPLACED