In Praise of Free Play 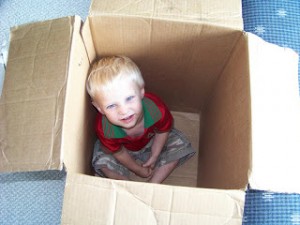 It’s a typical toddler birthday party. The gifts are quickly unwrapped. While his parents ooh and aah over the wonderful toys, little Evan is enthralled with the discarded colorful paper and ribbons. If he’s really lucky, the gifts came in big boxes – and we know what that means. To heck with the gifts, there are boxes to play with!

When we were children, how many of us were thrilled at the prospect of a new appliance delivery? It wasn’t the new fridge or dryer that we were anticipating, it was The Box — the great mysterious box that would provide us with hours of entertainment. What exotic places or far away planets would we travel to? What magical stories would we tell? What would we experience by getting inside this box?

Amid all the wonderful opportunities our children have, from organized sports and music lessons, to specialized school prep courses, there is one thing those activities don’t offer: the ability, the opportunity for children to reach beyond what they know. To use their imagination.

If we have so much to entertain our children, why is it important for children to play with a box?

Because that box doesn’t tell a child what to do.

It doesn’t present itself as anything but an empty box. There are no preconceived notions as to what should be done with it. What that box becomes is entirely up to the child.

Organized games are fun. Sports, outside activities, card and board games, even video games can offer useful life lessons in terms of cooperation, taking turns, and so on. But these games have rules that are set up in advance. In order for the children to play, they must follow the rules.

On the other hand, free play, such as playing with the box or running around outside with friends, has no preset rules. The rules are what the children decide they should be. And, if you watch children in free play, you may also notice that the rules are often very fluid. What wasn’t allowed at the beginning is more than acceptable later on, for example.

Fantasy play, which can include rough-and-tumble wrestling or having a tea party, calls on using imagination. Roles have to be created and there are decisions on how those roles will be played, who does what, when and where. As the play evolves, more thought has to be put in to the next steps of the game. There is likely a lot of negotiation as each child tries to be what he or she wants, or at least do something that gives him or her pleasure. Cooperation is needed so the play runs smoothly, and learning that you can’t always have your own way may also pop into the equation – that is, if you want to have playmates the next time you want to play.

Unfortunately, fantasy and imaginative play are becoming a lost art in many families. Too many children aren’t allowed to be bored – which is often when fantasy games are created. Many parents feel that if they allow their children to become bored, they must be failing in some way. So, to prevent boredom, there are many activities to choose from, either independently or with a parent.

Fantasy play may also be losing out to a perceived lack of time. Children are spending time in school, in daycare, and in organized activities. When they get home, they may have homework to do or they’re just plain too tired to do anything but watch TV or play on the computer. Parents, who are organizing their own full lives often don’t have the time or wherewithal to encourage their children to play. It’s easier to keep them busy.

And finally, there is the issue of adult hovering, or helicopter parenting. Parents who fall into this category don’t allow their children to play by themselves or with other children without their supervision for fear that they may get hurt physically or that their children may not be able to hold their own against a friend who may be a stronger personality. By being ever present, the hovering parents can ensure that their children always get to play fair, take turns, and have an adult to turn to if they feel that play isn’t going the right way.

Of course, life isn’t always so cut and dry, but if we think about it, it is easy to see that our children are not getting many opportunities to be kids, to pretend there are flying off to planet XYX to battle the bad guys. They can’t set up an elaborate theater so they can present a puppet show to their dolls and stuffed animals, and they can’t lie on the grass, staring up at the sky to see the clouds.

Although our lives are enriched with technology and fun that didn’t exist a generation ago, we shouldn’t relegate free play into the past, something quaint that we do when the power goes off.

Free play is an essential part of being a child and children who don’t get that opportunity to play may be missing out on a vital part of childhood development.

Guest blogger Marijke Vroomen Durning is gathering stories about games we used to play as children. She invites people to visit her website, Games We Used to Play, to read other stories and to submit a memory of a game (or games) they played, perhaps discovering that these favorite games were also played elsewhere with different rules or under a different name.