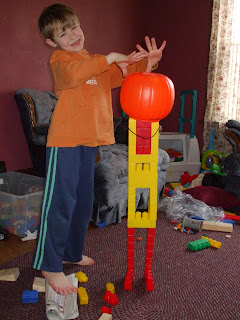 You’ve heard it before: play is the work of childhood. But even caring adults sometimes have a hard time seeing the value in, well, just playing.

When your son is hanging off the sofa, upside down, with a toy car in one hand and a grocery story Ninja in the other — while you’re busy putting away groceries — it can be tempting to yell, “Put that down and come help me!”

When his play threatens to overwhelm the house with chaos (think couch cushion forts and a box of dress-up clothes strewn all around the room), suggesting a nice quiet game of checkers can seem like the perfect way to keep your sanity.

Homeschool parents, in particular, may struggle to recognize the value of play. I know I do. How do I reconcile the scenes and expectations of my childhood — structured classes and a constant stream of achievement — with my current reality? My boys are far more likely to spend their days with playdough, blocks, cars and odds and ends than workbooks. And while I know there’s value in play, it can be hard to remember that when it looks like my boys are “doing nothing.”

Enter an intriguing article from Scientific American, The Serious Need for Play. The author uses research to prove, yet again, the need for play. Free, unstructured play, she says, is crucial for emotional, cognitive and social development, and children who are deprived of play may become socially maladjusted adults.

The scary thing is that play, the staple of childhood, is in danger. According to a study referenced in the article, children’s free play time dropped by a quarter between 1981 and 1997; I’d be willing to bet it’s dropped even more since then.

But play — perhaps more than anything else — is absolutely essential to long-term well-being. A study by the High/Scope Educational Research Foundation found that by age 23, 1/3 of studied children who attended academically-oriented preschools had committed a felony, as compared to only 1/10 of the children who’d attended play-oriented preschools.

None of us expected this pandemic, save maybe a … END_OF_DOCUMENT_TOKEN_TO_BE_REPLACED

You are not the only one who is overwhelmed by … END_OF_DOCUMENT_TOKEN_TO_BE_REPLACED

When it comes to safety, we can do much to support … END_OF_DOCUMENT_TOKEN_TO_BE_REPLACED

How are you talking about coronavirus with your … END_OF_DOCUMENT_TOKEN_TO_BE_REPLACED

None of us expected this pandemic, save maybe a few epidemiologists … END_OF_DOCUMENT_TOKEN_TO_BE_REPLACED

You are not the only one who is overwhelmed by homeschooling. I … END_OF_DOCUMENT_TOKEN_TO_BE_REPLACED