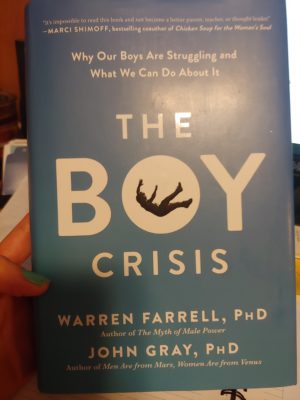 Is there a “boy crisis?’

Yes, despite the fact that men still remain in control of most companies and governments throughout the world. Continued male dominance of professions and power is obscuring the fact that boys and young men are struggling — and their struggles affect us all.

That, in a nutshell, is the premise of The Boy Crisis: Why Our Boys Are Struggling and What We Can Do About It, by Warren Farrell and John Gray. Farrell, a long-time advocate of equality, has served on the board of the National Organization for Women and is the currently Chair of the Commission to Create a White House Council on Boys and Men. Gray is the author of the Mars/Venus books, including the seminal Men are From Mars, Women Are From Venus. Farrell is the primary author; best I can tell, Gray authored the section on ADHD. (More on that later.)

This book is divided into 6 sections:

Should You Read “The Boy Crisis?”

It depends. If you are a policy maker or educator of boys who wants to better understand that challenges facing the boys in your classroom, I think the answer is yes. If you are a slightly geeky and wonky parent of boys who wants a deep understanding of the factors influencing boys’ development, the answer is yes, with a few caveats. (Again, more later.) If you are a parent who is simply looking for some tips to help you more effectively parent your son, I think you can skip it. (Listen to our 33 minute podcast instead. You’ll get most of the same info in a fraction of the time.)

There’s valuable information in this book, no doubt. The chapters about the importance of dads in boys’ (and girls’) lives contain potentially life-changing information; as a mom, it helps me acknowledge and appreciate the contributions of my boys’ dad, and reminds me that I need to prioritize my boys’ relationship with their dad. The “Heroic Intelligence” section inspires reflection on the societal messages we’ve long sent our boys. If we as a society ever decide to get serious about male mental health or the life expectancy gap between men and women, this information is crucial. And yes, serious reflection on the messages that surround our boys can help us raise better boys in the here and now.

1. Warren Farrell has never raised boys. He clearly cares deeply about boys and men, and has worked with countless males over the years, in the hundreds, maybe thousands, of men’s groups he’s formed and facilitated. He’s got a solid understanding of the issues facing males, but lacks first hand knowledge of the challenges and joy of raising a small male human being in this day and age. If you’re looking for stories and insight from one who’s been there, this is not your book.

If children of divorce are to have a reasonable chance of doing as well as children in an intact family (one where the biological mom and dad are married and living in the same home as the children), these must must-dos must all occur consistently and simultaneously:

I’ve long been a proponent of  shared parenting. I live within 2 miles of my former husband, and our boys spend lots of time with both of us. As the years have gone on, both of us have gotten better about refraining from negativity; we saw, first-hand, how comments that didn’t even seem particularly negative to either one of us hurt our sons.

But #4??? Consistent couples counseling after divorce? First, it presumes resources; even if both of you have fantastic health insurance (not at all a given, in today’s world), your plans may not cover the same providers. Secondly, it’s just not possible in many cases. When I mentioned this fact to Warren during our podcast, he dodged, saying that if your child’s well-being is of your utmost importance, you can find a way to make things happen. But the problem is that it takes two people to make consistent couples counseling a reality; I can’t make it happen alone, no matter how much I care about our children.

Do I think that regular counseling sessions could help divorced parents most effectively parent their kids? Absolutely. But labeling it a “must-do,” when it’s more like a pie-in-the-sky dream for many divorced parents, does more harm than good, in my opinion.

3. The ADHD section was written by a family therapist, not a medical doctor. John Gray has written a book about ADHD (Staying Focused in a Hyper World: Natural Solutions for Memory, ADHD and Brain Performance) but he is not a physician. His website, however, does sell a lot of natural products that he claims will improve ADHD.

In my opinion — as a Registered Nurse and health journalist — the information in the ADHD section is not scientifically sound. Chapter 30, for instance,The Many Causes of ADHD, lists 12 “causes” of ADHD. Among them, video games. However, he provides absolutely no information that supports that claim. He writes about the fact that playing video games raises dopamine levels, and cites studies that show that video game play can depress activity in the parts of the brain associated with emotional control, but does not cite a single scientific study looking at or for a possible link between ADHD and video games. Perhaps because there are none? According to  Dr. Natalie Weder, a child and adolescent psychiatrist at the Child Mind Institute (a much more reliable source of information regarding ADHD), “there is no evidence whatsoever that TV or video games cause ADHD.”

Similarly, the evidence base for some of the other “causes” he lists is not nearly as strong as he’d have you believe. (Another example: unfermented soy and pasteurized dairy are both listed as a cause of ADHD, but the 3 paragraphs on that “cause”do not contain one single mention of a scientific study which suggests a link between unfermented soy or pasteurized dairy and ADHD.) I urge anyone who reads this section to read it with a healthy dose of skepticism, and to discuss its claims and recommendations with a knowledgeable medical professional. A child or adolescent psychiatrist — a medical physician who works regularly with children — is a much better source of information regarding ADHD than a family therapist.

Bottom line: Read The Boy Crisis if you’re interested in some background data regarding the problems facing our boys today. Skip it if you’re looking for parenting advice.

Teaching young boys about money is so important, … END_OF_DOCUMENT_TOKEN_TO_BE_REPLACED

You want what’s best for your boys. You want to … END_OF_DOCUMENT_TOKEN_TO_BE_REPLACED

Finding the right preschool and ensuring your son … END_OF_DOCUMENT_TOKEN_TO_BE_REPLACED

Teaching young boys about money is so important, but a lot of parents … END_OF_DOCUMENT_TOKEN_TO_BE_REPLACED

Pexels Raising boys isn’t always easy, but it's one of the most … END_OF_DOCUMENT_TOKEN_TO_BE_REPLACED

You want what’s best for your boys. You want to set them up with all … END_OF_DOCUMENT_TOKEN_TO_BE_REPLACED