Let that sink of for a moment. Now think about how our interactions with our boys might be different if we accepted that truth as reality, rather than accepting the stereotypical idea that teen boys want sex more than almost anything.

If we accepted the idea that teen boys care more about building relationships that having sex, our sex ed and health classes (and conversations within our homes, church and communities), might focus more on how to understand and relate to fellow human beings. Instead of leading with scary STD and pregnancy stats, we might talk about the hows and whys of relationships — we might talk about hallmarks of good relationships, characteristics of healthy relationships and warning signs that could suggest emotional or physical violence. We might then naturally segue into the role of sex within relationships — a conversation that could include “good” reasons for having sex, vs. “bad” reasons for having sex.

In short, if we accepted and respected teen boys as humans, we might talk about the messy realities of relationship-building, instead of just tossing them some condoms and saying, “Stay safe,” or “Don’t get her pregnant.”

Instead, our culture consistently slots teen boys into tiny, constrained spaces. Our culture tells our boys that they must protect their manliness first and foremost. And our culture tells boys exactly how to do that: Don’t show too much emotion. Don’t like anything too girly. Be hypersexual. Don’t take shit from anyone.

Let’s loosen the bonds that hold our teen boys. The next time you see a teenage male, push aside the stereotypical thoughts that leap into your mind. Make an effort to see the young boy as a human, not as a “teen boy.” You might be surprised at the depth and diversity of boys’ interests and passions, and their willingness to help and engage with society and culture. 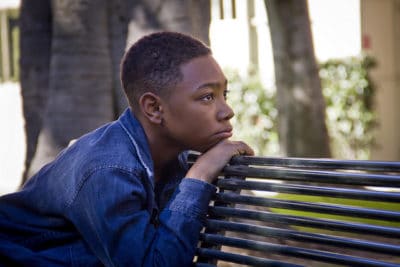 A new research study shows that teen boys care more about establishing meaningful relationships than sexual exploits. Let that sink of for a moment. Now