How to Deal with a Troublemaker

This is a xylophone…. 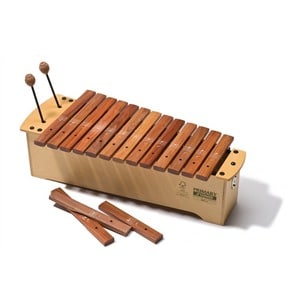 This son, age eight, does not particularly like school, or music class. And with reason. This son, like many boys, is a get up-and-go kind of kid, not a sit-down-and-learn-quietly kid. As you can imagine, that’s landed him in trouble a time or two. In fact, we recently got an email from his teacher, informing us that he’s been getting into and creating trouble in music class.

The fact that he’s screwing around in music class does not surprise me. It’s a class he’s not interested in. Plus, he’s a very social kid who loves to make other kids laugh. A kid who’s not interested  or engaged + a deep desire to have fun and make others laugh = a kid who is probably doing anything other than what he should be doing in class.

Fortunately, the music teacher talked to my son’s classroom teacher, who’s been working since the beginning of the school year to figure out ways to keep said son engaged and learning. This teacher noticed that my son likes to stay busy and loves helping. Give him a job, and he’ll do it.

She shared that info with the music teacher, and together they brainstormed responsibilities for my son.

Last night, before the concert, my son shared with me that he “finally gets to play an instrument!” He told me about the $400 xylophone, and that he’d be playing the instrument during one of the songs. His pride  — and an almost breathless air of I’m finally one of the chosen ones! — was clearly apparent, and a clear departure from his usual attitude toward concerts. This is the kid who usually tries to beg out of concerts. Who usually lip syncs his way through the songs.

When his class came on stage, my son was easy to spot: Back row (he’s tall for his age), the only boy wearing a suit coat. (He’d borrowed it from his older brother). Also easy to see, even from my way-back vantage point: My son, whispering and talking to his neighbors between songs, and exchanging some funny glances even during songs. From the audience, it was easy to see who the “good” students were (the ones who stood straight, sang with passion and paid close attention to the teacher through each and every song) and who the “troublemakers” were. It was also clear which group my son belonged to.

Then came the xylophone song.

Many children left the risers to take their place in front of instruments placed at the front of the stage, and my son kneeled in front of the xylophone with all seriousness. My son — the one who had been screwing around during the other songs — was all business. You could tell how careful he was being with the beat, how much he wanted to get it “right.” I recognized the look of intense concentration on his face. It’s the look he gets when he’s engaged, when he cares about something.

In that moment, I realized two things: 1) how incredibly smart it was for his teacher to give him the xylophone job and 2) how often kids like my son miss out on those kinds of opportunities. So often, the “good” kids — the ones who are listening, who aren’t disruptive — are the ones picked for special activities such as that, and I can understand why. (If you’re the teacher, do you really want to take the chance of giving the screw-up, the kid who can’t be counted on to listen, an important job?) Yet the kids who are screwing around are often the ones who most need an opportunity to become engaged.

My son understands all of that, in an eight-year-old way. Even at eight, he’s fully aware that troublemakers don’t often get picked for special assignments; hence, his comment that he finally gets to play an instrument. (He’s been in school for five years, counting preschool, and this is the first time he’s been picked to play an instrument.)

Think about that. On some level, the kids who aren’t getting picked for special assignments and privileges know they’re not getting picked. They know the “good kids” are getting picked, and that they aren’t, and so often conclude that they’re “bad,” or, at the very least, not one of the good kids. Quickly, they assume that school is not for them, because clearly their behavior and interests are not welcome in that environment. And that’s when most of them further detach from school. Why try, they figure, if I’m never going to be good enough anyway?

Yet something so deceptively simple — trusting a child, giving him a task that fits his interests and personality — can change a child’s attitude. Can re-engage that child, if only for a few moments.

My son concentrated hard last night while playing the xylophone. And after the concert, my son, the one who has never cared about music class before, asked me, “Did you hear me screw up?”

My son, the screw-up, took his job seriously enough that he recognized his mistake and was talking about it after the concert. Music will likely never be his favorite class, but I’m so grateful that his teachers took the time to figure out his interests and personality. I’m so grateful they let a troublemaker play the xylophone, and I hope that other educators will take a moment to remember this story the next time they’re handing out plum jobs or privileges.

Don’t write off or ignore the kids who are getting in trouble. Take some time to figure out the kid instead. Consider giving him a job or responsibility that fits his personality and interests. And then, see what beautiful music you can make together.

Literacy skills are inextricably linked to success in the modern world. Pexels – CC0 License But boy’s literacy rates in schools are falling in comparison