A lot of boys hate school.

That’s not exactly a well-kept secret. If you have boys of your own, you’ve likely heard plenty about what they don’t like about school, ranging from the food served at lunch (in my kids’ case, disgusting and not enough) to teachers they don’t like (the word boring gets tossed around a lot at my house) to what they perceive as unfair treatment (“The girls never get in trouble!“). And if you’re a teacher, you’ve likely noticed that a lot of boys in your class are not exactly engaged; a lot of them look (and act) as if they’d rather be anywhere but in a classroom.

Most teachers don’t want boys to fail; they just don’t know how to reach them. Most teachers are female; they don’t “get” boys, and that’s not really their fault. They’ve never been a boy, so they have no firsthand knowledge of how boys think, act and feel. They don’t understand boy culture because, again, they’ve never lived it. And they probably don’t know very much about gender differences and the challenges boys face both in and outside of school because most schools of education don’t cover gender and education.

But there’s a lot educators can do to make schools and classrooms more boy-friendly. (In fact, veteran educator Kelley King wrote a book on that very subject: Writing the Playbook: A Practitioner’s Guide to Creating Boy-Friendly Schools.) Here are 7 tips educators can use — right now! — to make school a better place for boys:

1. Say ‘yes’ to poop. And guns. Generally speaking, boys love disgusting things — poop, pee, gross animals, you name it. They also love weapons, violence and warfare. Yet teachers and schools routinely tell boys they can’t read, write or learn about poop, guns or other topics they consider to be inappropriate (at best) or harmful (at worst). What happens then? Boys shut down. They withdraw. They begin to think something’s wrong with them for being interested in such things in the first place. And they decide that school is not a place for them, because school doesn’t allow anything they’re interested in.

The easy solution: Let boys pick their own reading materials and write about whatever they want. Don’t automatically say no when a boy tells you he wants to do a project about poop. Research has consistently shown that students are more likely to read when they choose their own material, and that there’s no harm in letting kids write, draw, act out or play violent scenes. In fact, kids often work through their own fears via imaginative play, writing and drawing. And as for a research project about poop? Why not?

2.  Move! Get the kids in your classroom moving as much as possible, as often as possible. Sitting, according to the latest research, is quite literally killing us, and both boys & girls (and men & women) retain information better if movement accompanies learning.

Some easy ways to incorporate move movement: Let kids jump up and down as they spell words or practice math facts. Have students act out scenes in stories (and scenes in history class). Don’t stop the kid who’s fidgeting; let him wiggle his leg or play with his eraser to his heart’s content.  (Provided he’s not bothering another student. If he is, move him to a place where he can continue his activity without disturbing anyone else.) More great movement ideas are here.

3. Put down the books. And pencils. I get it: reading and writing are tremendously important skills, and educators today are under a great deal of pressure to make sure their students can do both (and can prove their skill at both on standardized tests, which are often used to assess teacher effectiveness.) But students, especially the youngest students, don’t learn by reading and writing; they learn by doing. When you emphasize the mechanics of reading and writing — putting the emphasis on decoding words and proper penmanship and spelling — you create barriers for young boys, who may not be physically and biologically ready to read and write. (The part of the brain that handles language matures years later in boys than it does in girls. Similarly, boys’ fine motor skills tend to develop later than girls’.)

Instead, focus on the point of reading and writing: communication. Focus on reading and writing as a way to share information and stories and — at least in the early grades — prioritize content and imagination over spelling and penmanship and pronunciation. Build students’ love of language by reading them books; read-alouds teach students new words and subtly teaches them how to build sentences and paragraphs and stories. Let students give oral reports or dictate reports and stories while they continue to build up they physical writing abilities. For more info, see Writing vs. writing.

4. Invite men into your room. The world of education is overwhelmingly female, and if you’re a boy — especially a little boy who is beginning to learn about gender differences and strongly desires to be one of the guys — it’s easy to look around and conclude that school and learning is not for you, because it’s not a guy thing.

Boys have historically looked to men for guidance; for millennium, boys have learned side-by-side with men. So invite dads, former students and men from the community into your classroom as readers and guest teachers. Have them read to your students. Let them talk about their jobs — what they do and how they use the skills they learned in school. And let them lead and participate in classroom activities, such as science experiments, whenever possible.

5. Learn to love boys. It’s hard to be a great teacher for boys if you don’t understand them. Taking the time to learn about boys — about how they develop; about what makes them tick; about the challenges they face at school, at home and in the community — will increase your effectively as a teacher because your students will sense that you get them. Trust me: the boys know which teachers like boys and which teachers think boys are trouble.

Our Resources page is full of books and websites that will help you understand boys.

6. Offer profuse (but real) praise. Most boys — even the troublemakers in your class — want nothing more than to please you. In fact, troublemakers are often boys who’ve given up trying because they’ve gotten so much negative feedback about their interests and desires that they feel it’s impossible to please the teacher.

So make every effort to “catch” and praise the boys in your class, even if they’re doing or working on something that seems silly to you. (Try saying something like, “Wow! I can tell you’re really into this!” to a boy who’s working on a project about poop, or drawing detailed picture of a gun.)

Remember that some boys are extremely sensitive to criticism. Dr. Marcus Jackson, a successful principal, once told me, “A boy will raise his hand once. If he gets the answer wrong, how you reply to him is critical, because if he feels devalued or humiliated, he will not raise his hand again.”

7.  Keep it real. Boys’ biggest complaint about school? That what they’re learning in school has absolutely nothing to do with the real world. (How many times have you heard, “When will I ever use this?“) You know and understand that the skills you’re building in the classroom  — reading, writing, critical thinking, mathematics — have all kinds of real-world applications, but your students don’t.

Boys love to do useful things, so bring the real world into your classroom whenever possible. One teacher I know brought a bunch of car parts into her classroom, and let the boys discover radius and circumference by measuring and manipulating car parts. Another encourages schools to adopt Apprentice Week, a week when students learn by doing, alongside a master. (The master could be anyone — a chef, a mechanic, a lawyer, a businessman; every job involves multiple opportunities to apply reading, writing, math and critical thinking skills.) Don’t wait for your students to figure out the real-world applications of the skills they’re learning in the classroom. Instead, help students learn through real-world activities. The boys in your class will thank you.

What other tips do you have for teachers of boys? What else can teachers do to make school a better place for boys? 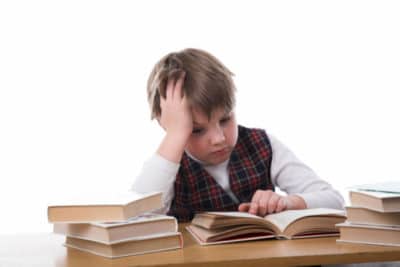 A lot of boys hate school. That’s not exactly a well-kept secret. If you have boys of your own, you’ve likely heard plenty about what