Can a six-year-old sexually harass another child?

This week, a 6-year-old Colorado boy was suspended for sexually harassing a female classmate. His crime? Kissing the girl on the hand, after previously kissing her on the cheek.

The Internet erupted in outrage after those details and an undeniably cute video of the boy went viral. People who had never met the boy, the girl or anyone at the school called the punishment “outrageous” and “unbelievable.” One Internet commenter went as far as to say “The entire school staff involved needs to be relieved of duty.” Without knowing all the details.

If I learned anything from my Why I Was Wrong to Trash the Sound of Music Live post, it’s that commenting on events-in-progress is often a mistake. Instead of grabbing my keyboard to snark, minutes into the production, I would have been better off if I’d simply let the production wash over me first. I could have simply reserved my judgement, watched the show in its entirety and thought about it a bit before thoughtfully sharing my observations and opinions. Or I could have changed channels. Either way, I should have refrained from commenting rudely on a work in progress.

Think about that. Whether we create art or simply live our lives, all of us can relate, on some level, to the idea of a work in progress. Writers understand that rough drafts do not necessarily predict the quality of the final novel. Painters know that a sketch may have little in common with the final painting. Thoughtful parents know that a mischievous child may well grow into a responsible adult, despite some childhood indiscretions. We are all, all of us, works in progress.

The situation in Colorado was similar. People were quick to stand up for the boy before they even heard what the girl, her family or the school had to say.

As it turns out, the girls’ mother said that the kissing was not an isolated incident, that she’d had to ” coach her [daughter] about what to do when you don’t want someone touching you, but they won’t stop.” A school district representative said the school “never suspend[s] a student for one minor little violation.”

Do those facts change your assessment of the situation? Are you still on Team Boy, or are you feeling a little sympathy for Team Girl? How about Team School? Are you beginning to understand that this was not a black and white situation?

What I’ve come to realize is that very few people were concerned strictly with the boy or the girl. The reason this story spread like proverbial wildfire is because, at broadest glance, the situation seemed all familiar to too many people.

At first glance, this appeared to be the story of a school criminalizing boy behavior. And boy, do those stories resonate! We’ve talked about second graders suspended for Poptart guns, seventh graders suspended for an entire year for using Airsoft guns on private property and the general friction between boys and school.

These stories resonate because parents of boys and former boys and even some veteran educators are beginning to think that unyielding school policies hurt more boys than they help. Check the stats: zero tolerance policies have  failed to increase school safety, while increasing the likelihood that boys will get in trouble at school. In far too many cases, strict zero tolerance policies are leading boys  to prison.

So stories like this — stories about people we don’t know and have never met — become intensely personal for us. Adults who are sick and tired of seeing boys penalized in school for developmentally appropriate behavior such as squirming and running and hitting back at bullies latch onto these cases with vigor. Many feel powerless within their own communities. Many of us try to speak up for our sons or other boys in the community. We advocate for recess and ask for tolerance. But we’re scattered, tired and confused. We want to make things better, but don’t know how.

We’ve learned about the power of social media, though, so we bring the case before the court of the community. We debate the case — even without all the facts — on Internet forums. We bypass the system in hope of finding relief and satisfaction, because many of us are tired of dealing with a system that doesn’t seem to want to hear what we have to say.

But what about the children? The mom of the Colorado boy was clearly incensed that the words “sexual harassment” were included on his school record. She was concerned that the title might follow and stalk her son. Her concern is understandable, given today’s culture. Think about it: Would you want your son labeled a sexual harasser?

By taking her son’s case to the Internet, though, this well-meaning mom linked her son’s name, face, and picture with the words “sexual harassment” far more effectively than a note in her son’s school record would have.

This story touches on another nerve as well. As a society, we’ve become increasingly sensitive to the idea of unwanted touch. After being shocked by stories of sexual abuse between clergy and congregant, teacher and student, we’ve (rightly) decided that such behavior is unacceptable. We’ve taken steps to increase the safety of our children, and more of us than ever before are talking to our kids about “good touch” and “bad touch.”

But maybe, perhaps, the pendulum is swinging a bit too far, in compensation. We seem to have forgotten that humans are meant to touch one another. In our haste to protect our children, we’ve ended up with teachers who refrain from hugging students, for fear of a lawsuit, and students who view every touch with suspicion.

Is it possible that some of our attraction to this story was based in part on the fact that we have yet to reach national consensus on how much touch is OK?

In the end, the school in Colorado agreed to erase the words “sexual harassment” from the boy’s record and replace them with “misconduct” instead. The boy will go on about his life, and hopefully will never find the news stories linking his name and image with the words “sexual harassment.” The girl will go on about her life, and hopefully will not some day conclude, after reading the news story, that speaking up is more trouble than it’s worth. The school, hopefully, will readjust their disciplinary policies, and discuss any proposed changes with the community.

As for the rest of us? I hope we’ve learned that few issues are as simple as they seem at first glance. I hope we’ve learned to look inside whenever an issue triggers an emotional response, and I hope that we will spend some time addressing the root causes of our discomfort the next time a news story sets us all aflutter. 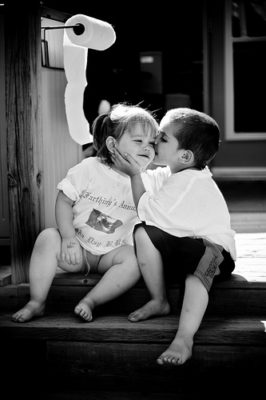