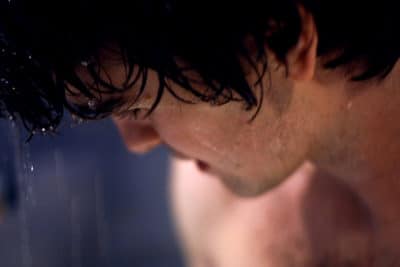 Remember the sexual abuse case involving Jerry Sandusky and Penn State University? Did you know that the case took off because one mom starting questioning her son (and others) after he came home from Penn State with wet hair?

This mom knew her son and his routines so well that she knew there was absolutely no reason for him to be coming home at that time, from that place, with wet hair. She was so in-tune with her son that she actually noticed his wet hair when he came home; she didn’t just mutter a cursory “hi” without looking up from her computer or the dishes or whatever else she was doing at that moment. She saw her son, and she knew something was not right.

Now, I’m not saying that the other parents, those who didn’t know about the abuse until later, were not in-tune with their sons, or that they didn’t love them. What happened to these boys (now men) at the hands of Sandusky was reprehensible, and Sandusky is solely responsible for his acts. I don’t mean to lay blame, at all, at the feet of the victimized.

But think about it. The warning signs of all kinds of things — sexual abuse, physical abuse, bullying, trouble in school — are subtle. And the only way to catch those signs to to know what “normal” is.

Normal varies from kid to kid. I’ve got one son who insists on wearing jeans and a certain baseball hat with his sunglasses perched atop just so, each and every day. My other three sons wear hats on occasion only, and it would be no big deal (and not at all unusual) for them to come home from somewhere without their hats. (Am I the only one whose boys have a tendency to leave things lay?) But if my jean-and-hat-wearing son suddenly came home without his hat, or with broken sunglasses, and didn’t have a plausible story, I’d know something might be up.

The questioning mom was fully aware of her son’s routine too. She knew he didn’t normally take a shower or get wet while at Penn State. Do you know your boys’ routines? It can be hard to keep up with all of the details, especially if you have more than one child. But when you know what usually happens at your sons’ practices, or his usual after school routine, you’re better able to communicate with him, and better equipped to notice when something is out of whack. If your son usually comes home from football practice all dirty and sweaty, and comes home with barely a streak on him one day, it’s time to ask questions. The answer might be perfectly innocent and plausible: maybe the team watched and discussed video of their opponents before the big game. Ninety-nine percent of the time, in fact, variations in routine are just that: simple variations.

The only way to notice a variation, though, is to know the usual pattern. So pay attention to your boys. Know what they like, who they hang out with, and what they do in the course of a normal day. And then, be there for them, whenever possible. I know that it’s not always possible to be home the moment your son arrives home, or to always be the one to pick him up from daycare or practice. That’s OK. What’s important is knowing your son, and sharing the information with others as needed. (Your childcare provider, for instance, should know all about your sons’ likes and dislikes and regular routine.)

Know your son, and then act on your intuition. Some kids will come straight out and tell you when something is not right. Others will clam up. If your son refuses to tell you what’s going on, or if something about his answer seems off, ask questions. Ask friends. Ask coaches. Ask teachers. If your intuition is nagging at you, keep going.

My oldest son wasn't yet two when Raising … END_OF_DOCUMENT_TOKEN_TO_BE_REPLACED

Raising my sons has always been a pleasure. … END_OF_DOCUMENT_TOKEN_TO_BE_REPLACED

None of us expected this pandemic, save maybe a … END_OF_DOCUMENT_TOKEN_TO_BE_REPLACED

My oldest son wasn't yet two when Raising Cain:Protecting the … END_OF_DOCUMENT_TOKEN_TO_BE_REPLACED

Twenty-six years ago, a beautiful baby boy inducted me into parenting. … END_OF_DOCUMENT_TOKEN_TO_BE_REPLACED

Raising my sons has always been a pleasure. I don’t know when … END_OF_DOCUMENT_TOKEN_TO_BE_REPLACED