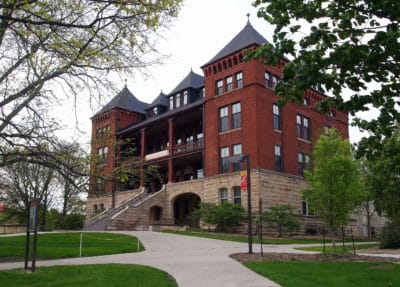 There’s no school on Friday, and at least a few families I know are taking their high school juniors on college visits that day.

I’ll be honest: hearing that other families are heading to college campuses on Friday re-ignited some niggling anxiety for me. I first mentioned college visits to my son a few months ago; he’s my second son, so I know now is the time when families start scheduling visits. Come next year, this time, he’ll likely be submitting college applications, and there’s not a lot of time between now and then. Junior year goes quickly.

My son, though, has expressed no interest. Like, none. When I said, it’s time to think about where you might want to go to college, he said, uh. When my parents — his grandparents — asked him what he plans to do after college, he dodged the question. That’s what he does whenever anyone asks.

His class choices — AP Economics, Physics, Trig — suggest to me that he’s preparing for college. The fact that he chose to take the PSAT after I mentioned it would put him in the running for scholarships suggests that college (and the need for scholarships) is on his radar too.

Yet he hasn’t mentioned any schools, nor asked to schedule any campus visits. I’ve been trying to tamp down my worry and anxiety, my niggling feeling that I should be doing more, by reminding myself that my oldest son found his own way through this process. When he was in high school, I worried too. But unbeknownst to me (at the time), he’d been spending time on the internet, researching options. He learned that Music Business is a major, a major that combines his love of music and performing with his passion for business. And he found the best Music Business Programs in the country.

All while I thought he wasn’t even yet thinking about college.

Still, I worried. And part of me thought, I should do more.

Then I saw Jessica Lahey’s brilliant article, “Applying to College: It’s Your Teenager’s Journey; Not Yours.” In it, Lahey, the author of The Gift of Failure: How the Best Parents Learn to Let Go So Their Children Can Succeed writes:

Choosing a college is a highly personal decision, and there’s no better way to give your teenager autonomy than by allowing him or her to take the lead in applying to college… rescuing, nagging, reminding, and micromanaging undermine the emotional connection we all work so hard to establish with our children. Our teens need to know we have their backs and trust in their ability to head out into the world and make it on their own.

That is why I’m not going to push my son to schedule a college visit. I’m going to let my son (and his brothers) take the lead in planning their own lives. I will continue to be here, as always, to facilitate, to answer questions, to provide technical assistance.

I will trust my son to find his own path through life, and I will equip him with the tools he needs to find it.

Over 30 million adolescents play sports in the … END_OF_DOCUMENT_TOKEN_TO_BE_REPLACED

What about school? is the question on everyone's … END_OF_DOCUMENT_TOKEN_TO_BE_REPLACED

I have spent two decades working on raising boys … END_OF_DOCUMENT_TOKEN_TO_BE_REPLACED

My oldest son wasn't yet two when Raising … END_OF_DOCUMENT_TOKEN_TO_BE_REPLACED

Over 30 million adolescents play sports in the U.S. alone. Sports are … END_OF_DOCUMENT_TOKEN_TO_BE_REPLACED

What about school? is the question on everyone's minds right now. It's … END_OF_DOCUMENT_TOKEN_TO_BE_REPLACED