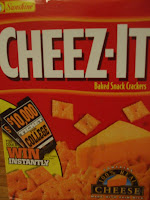 This is the box of crackers I bought for my boys, for no other reason than A) they love them and B) the crackers were on sale. (If I’m honest, I’ll have to tell you that Reason B trumped Reason A. Reason A is true all the time, but the only time the Cheez-Its show up at home is when Reason B is also true!).
Turns out it was the best $2.50 I spent all week.
A couple weeks ago, a sensationalistic headline lamented the lack of appropriate, non-biased textbooks for homeschoolers, a headline and story that fed the fears of every American who ever wondered how in the world homeschooled children learn anything, surrounded as they are by questionable parents and questionable materials. At the time, I and many other homeschoolers argued that there are plenty of resources available, including secular texts, the public library, community classes and more. I forgot to mention Cheez-It boxes.
Never in a million years would I have planned a unit study around Cheez-Its. Never in a million years would I plan a lesson with a Cheez-It box as the text. But that’s exactly what happened.
I was eating breakfast with my youngest two boys when Boy #3 began reading words off the box. He recognized the word “it” and “win.” We talked about how “win” can become “wind” with the addition of just one letter. (At that point, we were using the magnetic letters on the fridge behind us to enhance our impromptu lesson.)
Boy #4, meanwhile, became very intrigued with the big, bold letters. At 4, he’s just beginning to recognize certain letters. He pointed to each one, asked what it was and traced the letters with his chubby, not-quite-baby fingers.
By then, Boy #3 had moved onto the side panel, the nutrition information. What’s s-o-d-i-u-m, he asked? Sodium, I answered — salt. He read the nutrition information, the percents posted on the side, and we talked about why your body needs sodium (salt) and why too much (of anything) can be a bad thing. We talked about calories as a source of energy. We talked about vitamins. And we had a lengthy discussion about the food pyramid.
For almost 20 minutes, over a casual breakfast with my boys, we studied phonics, language arts and science in a completely natural, unhurried manner. My boys were asking for information; they were ready to learn. I answered their questions, before I even realized what I was doing. The Cheez-It box, that lowly orange-and-red cardboard casing, had become our text.
Non-homeschoolers often wonder how homeschooled children can learn anything outside a structured classroom. Veteran homeshoolers often shake their heads at such queries. To us, the answer is obvious. Children learn all the time, whether you want them to or not. Children ask questions, adults answer and learning occurs. Children express an interest, adults help them find resources and learning occurs. Mom buys a box of Cheez-Its, children ask questions and learning occurs.
Sometimes, it really is as simple as that.
What non-traditional material has become a “text” at your house?
The following two tabs change content below.

My oldest son wasn't yet two when Raising … END_OF_DOCUMENT_TOKEN_TO_BE_REPLACED

Raising my sons has always been a pleasure. … END_OF_DOCUMENT_TOKEN_TO_BE_REPLACED

None of us expected this pandemic, save maybe a … END_OF_DOCUMENT_TOKEN_TO_BE_REPLACED

My oldest son wasn't yet two when Raising Cain:Protecting the … END_OF_DOCUMENT_TOKEN_TO_BE_REPLACED

Twenty-six years ago, a beautiful baby boy inducted me into parenting. … END_OF_DOCUMENT_TOKEN_TO_BE_REPLACED

Raising my sons has always been a pleasure. I don’t know when … END_OF_DOCUMENT_TOKEN_TO_BE_REPLACED