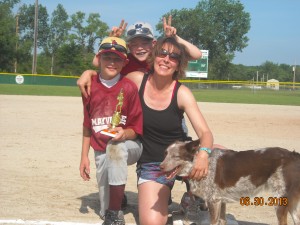 This is what raising boys looks like, at least some of the time.

Note the blue teeth on my youngest, there in the background. You may have your own policy about candy and artificially-colored food, but in my family, the policy is Do What You Need To Do to Get Through the Tourney. For this particular tourney, that meant giving said youngster $1 per game, to buy whatever he wanted at the concession stand. Clearly, he chose something blue.

See the trophy and satisfied smile on Boy #2? His team just won the championship, and he had the hit that drove in the winning run.

This is a photo that’s OK to share; none of my children will object to this photo, at least not yet. (When he’s 16, I thoroughly expect that my youngest may come to me and say, “Mom! Why did you post a picture of me with blue teeth??”) This is a photo that I treasure, because it captures a moment of triumph. It’s a photo I love, because it shows me relaxing and having fun with my boys.

This is not what our life looks like  most of the time.

The reality is that what you see on the Internet, most of the time, is not reality.

This weekend, in attempt to wound me, one of my boys (a boy who shall remain nameless and numberless here) said, “You write about parenting? Hah! You don’t even know what you’re doing!”

I paused. I’ve been at this gig long enough to know that it’s sometimes it’s best to pause, reflect and ignore. He wanted an emotional response, and I refused to give it to him.

But later, I went back. Later, I said, “You know what the definition of a good mom is? A good mom isn’t one who knows what she’s doing every minute of every day, who handles every situation perfectly. A good mom is one who gets up every day and keeps trying anyway.”

Your reality — and mine — is not always picture perfect. But as long as we get up each day, and try again, I’d say we’re dong fine.