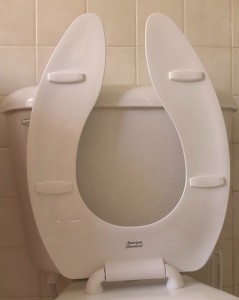 Attention, parents of boys who are learning how to pee standing up: Look out for falling toilet seats!

–“Potty Training Pitfalls” in the Dec. 2013 edition of Parents magazine.

Listen: Falling toilet seats are not something you have to worry about as you parent your boys. Should your boys stand back a bit from the bowl? Perhaps. Is it hard for a two-year-old boy to pee in the toilet while standing back from the bowl? Absolutely. So maybe, just maybe, you might want to hold off on the stand-up-to-go thing a bit longer, or have him pee into a small plastic training potty.

And let’s say — worst case scenario — that a toilet seat does fall on your son’s genitals. He’ll be hurt. He’ll cry. Will he require a trip to an emergency room? Probably not. But even if he does — even if this is is among the rare, serious toilet seat incidents — your son will have learned something from the event. Next time he pees, he’ll probably do something different. He might stand back a bit more. Be more aware of his surroundings. Or decide to sit to pee. Either way, he will be fine.

Mainstream parenting magazines all too often prey on parents’ fears. The publishers know that parents, especially new parents, worry about everything. They know that parents want the best for their kids. And so they create headlines and cover lines and articles that appeal to us on an emotional level, that get us to grab the magazine — because, really, do you want to be the parent who doesn’t know about a very real threat to your child?

The problem is that most of these “threats” aren’t serious threats. Consider these threats, covered in the December 2013 issue of Parents:

I feel tired and overwhelmed just looking at that list. That’s a lot of things I need to know about, be concerned about, and do right in order to raise a healthy child.

But here’s the thing: most of those things aren’t real threats. (The short article about the potential danger of codeine pain meds for kids following surgery is the exception, in this case.) Most of the things on that list are common, real-life everyday things that you can figure out on your own by trusting your instincts.

Do you really need a research study, parenting magazine and expert to tell you that indoor playspaces might harbor germs? No, you don’t. Any place that kids play harbors germs. The question is, what are you going to do about it?

You’re also smart enough to figure out how to mitigate the risk. You’re not going to let your child play on a clearly unsafe or unstable play structure, because your parenting instincts will tell you that’s a bad idea. You’ll probably ask your son to get out if you sense that something in the playspace — say, three much older, rowdier kids — renders it potentially unsafe for your child. Or you might let your kid keep playing, because you know and understand that he’s totally comfortable around older, rowdy kids.

We’ve been taught to look to experts for answers. But if we watch our children and pay attention to their needs, as well as to our own needs and values, we can figure out what to do in almost every situation.

There’s nothing wrong with consulting experts, or asking other parents for input and ideas. That’s smart. It’s also smart to be skeptical of any resource that plays up fear and implies that there’s one correct way to do things.

What’s the craziest, fear-based article you’ve ever seen in a parenting magazine?

When you have a son, it’s important to build a … END_OF_DOCUMENT_TOKEN_TO_BE_REPLACED

DIY activities are one way to counterbalance … END_OF_DOCUMENT_TOKEN_TO_BE_REPLACED

Teaching young boys about money is so important, … END_OF_DOCUMENT_TOKEN_TO_BE_REPLACED

When you have a son, it’s important to build a beautiful, meaningful … END_OF_DOCUMENT_TOKEN_TO_BE_REPLACED

Parenting is stressful. Wonderful -- and stressful. As a parent, you … END_OF_DOCUMENT_TOKEN_TO_BE_REPLACED

DIY activities are one way to counterbalance screen time. And, boys … END_OF_DOCUMENT_TOKEN_TO_BE_REPLACED