The headline last night — “Armed student reportedly holding high school classroom hostage in Wisconsin” — took my breath away. I live in Wisconsin. And I still desperately want to believe that things like that don’t happen in Wisconsin.

But they do. As you now know, a 15-year-old male student held about two dozen students and a teacher hostage for almost five hours yesterday in Marinette, Wisconsin, a town of about 11,000 on the Wisconsin/Michigan border. The student fired shots in the classroom, but ultimately released all of the hostages.

No one was injured, except the gunman, who shot himself when law enforcement officers stormed the classroom. The student died today.

No one was injured…seems like such a false and fake thing to say, doesn’t it? The entire town was injured. Every single child in that room will be affected for a long, long time. Parents’ hearts stopped last night as they waited to see what would happen. And somewhere in Marinette, a family is dealing with the worst possible grief tonight.

Tonight, his family is simultaneously grieving his death while trying to make sense of his actions — while the world clamors to know what they knew when. They’re dealing with grief and guilt and misunderstanding and hatred. They’re wondering if they did enough, if they said something wrong, if somehow they could have prevented the whole fiasco. They’d do anything, I’m sure, to turn the clock back to tomorrow morning.

My oldest son was born in 1997. He has never known a world where students didn’t shoot one another in school. Think about that. School shootings have, in some way, always been a part of my boys’ world.

So has terrorism. My oldest son was not quite 3 when the Twin Towers fell; his brother was only 1. We were watching Sesame Street when we heard the news.

Our children are growing up in the culture of fear.

I realize that violence is a reality for far too many kids today. I realize that an insecure environment is nothing new for children in many parts of the world and even here in the USA. It’s just that no one feels safe anymore. Not even residents of Middle-of-Nowhere, Wisconsin.

On some level, our children have come to expect random, extreme violence as part of life. In their world, it’s entirely possible that the grandma in front of them at the airport is concealing a bomb in her brassiere, or that a class will end abruptly in a spray of gunfire.

What does that knowledge do to a developing brain? Will our children suffer from an inability to connect, to trust?

I don’t know the answers. But I do know that succumbing to the fear will only make things worse. The only way — the ONLY way — out of this mess is to connect, to redevelop human connections.

When my children ask about Marinette, I will answer their questions. I will continue, however, to nurture their belief in the human spirit. I will continually point out all the wonderful and amazing people in this world who are working to make this world a better place. Just last night, I got an email from a neighbor who is organizing a fundraiser for a local couple who was recently diagnosed with cancer. (Yes, couple. Both husband and wife are staring at months of treatment and mounting medical bills.) A small-town fundraiser might not seem like much, but it’s an example of people caring, people connecting. It’s tangible proof that much good remains here in the world, despite the scary headlines.

I don’t want my boys — or yours — to get lost in the culture of fear. Let’s nurture their connections instead. 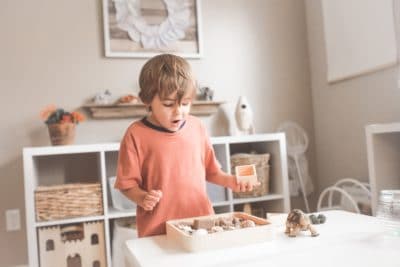 4 Fun Ways To Connect And Have Fun With Your Boys

Are you looking for ways to reconnect with your kids? If so, then you might want to consider planning a weekend away. Of course, for

Helping Your Son To Be Himself

Boys can suffer a lot from self esteem issues as they grow, and quite a lot of the time, these worries and fears are swept

Photo by Paige Cody on Unsplash Lockdown has been a trying time for all of us. A lot of parents have struggled during this period.