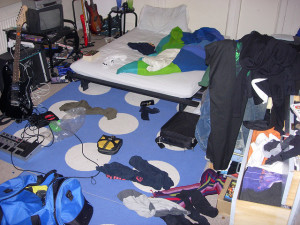 According to dictionary.com, futile means having no useful result. Like, say, vacuuming your living room only to discover a flood in your kitchen?

Life with four boys is anything but neat. Interesting, chaotic, loud, exciting, annoying and invigorating, but not neat. And for the most part, I’m OK with that. For the most part, I’m able to see the scattered toys, papers and books on the floor as physical evidence of their creativity and learning. But every now and again, enough is enough. Every now and again, I make an attempt to contain the chaos.

Today, while 3 boys were happily making/floating homemade boats in the kitchen sink, I headed to the living room to vacuum. I took a timer with me. 10 minutes of housework at a time is about all I can handle.

My timer hadn’t even beeped when screams summoned me to the kitchen. In less than 5 minutes, my 4-year-old had managed to flood the kitchen. Water was EVERYWHERE — on the floor, on the counter, on the stove, on my cell phone, running down the counters, seeping out of cracks, etc. It was the kind of mess that puzzles you for a moment because you have no idea how to clean it up.

“Towels!” I yelled. “Get the bathroom towels”

So my boys went running. Together, we slip-slided our way around the floor on bath towels. We also yelled at each other. The boys yelled at Boy #4; I yelled at them. By the time we were done, the kitchen floor was almost clean and 3 boys were in 3 time-outs.

That’s when the word futile popped into my head. I meant to spend 10 minutes cleaning the house. Instead, I spent 20 minutes cleaning up the kitchen — and I still have a load of towels to wash. Phyllis Diller had it right: Cleaning your house while your kids are still growing is like shoveling the sidewalk before it stops snowing.

None of us expected this pandemic, save maybe a … END_OF_DOCUMENT_TOKEN_TO_BE_REPLACED

You are not the only one who is overwhelmed by … END_OF_DOCUMENT_TOKEN_TO_BE_REPLACED

When it comes to safety, we can do much to support … END_OF_DOCUMENT_TOKEN_TO_BE_REPLACED

How are you talking about coronavirus with your … END_OF_DOCUMENT_TOKEN_TO_BE_REPLACED

None of us expected this pandemic, save maybe a few epidemiologists … END_OF_DOCUMENT_TOKEN_TO_BE_REPLACED

You are not the only one who is overwhelmed by homeschooling. I … END_OF_DOCUMENT_TOKEN_TO_BE_REPLACED