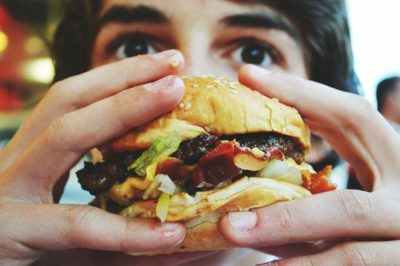 That’s the conclusion of a scientific study. I know, right? Tell us something we don’ t know!

But the study, published in the American Journal of Clinical Nutrition, could be reassurance for parents and teen boys in this day and age of eating disorders. While we tend to associate eating disorders, dieting and poor body image with girls, boys are affected too. Just today, another mom told me that her 7-year-old son recently asked if he was fat. (He’s not.) And my 12-year-old son, a growing boy if ever there was one, frequently expresses concern about the weight he’s gaining. He’s gotten the societal message that weight gain is bad — at 12-years-old.

Teenage boys, though, need to eat. According to the study, prepubescent boys average nearly 1300 lunchtime calories, compared to girls’ 900 calories. Boys in their mid-teens typically consume around 2000 calories at lunch. While that might sound like a lot (particularly to our weight-obsessed brains), boys need those calories to fuel their tremendous growth.

If you son starts obsessing about his weight, obsessively counting calories or exercising in the extreme, pay attention. As Adelaide Robb, an associate professor of psychiatry, said in a 2007 Washington Post article, “A teenage boy shouldn’t be eating what his 110-pound, dieting mother would eat. It’s normal for a half-gallon of milk and a loaf of bread to disapper every 48 hours if there’s a teenage boy in the house.”

Learning during a pandemic is challenging.  Hell … END_OF_DOCUMENT_TOKEN_TO_BE_REPLACED

We covered a lot of ground on ON BOYS parenting … END_OF_DOCUMENT_TOKEN_TO_BE_REPLACED

Over 30 million adolescents play sports in the … END_OF_DOCUMENT_TOKEN_TO_BE_REPLACED

What about school? is the question on everyone's … END_OF_DOCUMENT_TOKEN_TO_BE_REPLACED

Learning during a pandemic is challenging.  Hell -- LIVING during a … END_OF_DOCUMENT_TOKEN_TO_BE_REPLACED

Over 30 million adolescents play sports in the U.S. alone. Sports are … END_OF_DOCUMENT_TOKEN_TO_BE_REPLACED