There is a park in Japan where kids can build fires, play with tools and create their own play structures of scraps of wood and imagination.

Meanwhile, I fight for my child’s right to go outside when it’s wet or raining outside, to be allowed to toss and catch a football at recess time.

I’m currently devouring Amy Fusselman’s brand new book, Savage Park: A Meditation on Play, Space, and Risk for Americans Who are Nervous, Distracted , and Afraid to Die. The book was borne of Fusselman’s family trip to Tokyo. While there, a friend took her and her family (at that time, Fusselman plus husband and two young boys) to a variety of Japanese parks. The first, Haginaka Park (aka The Junk Playground), features dead and decommissioned heavy equipment: A bulldozer. A fire truck. A backhoe. 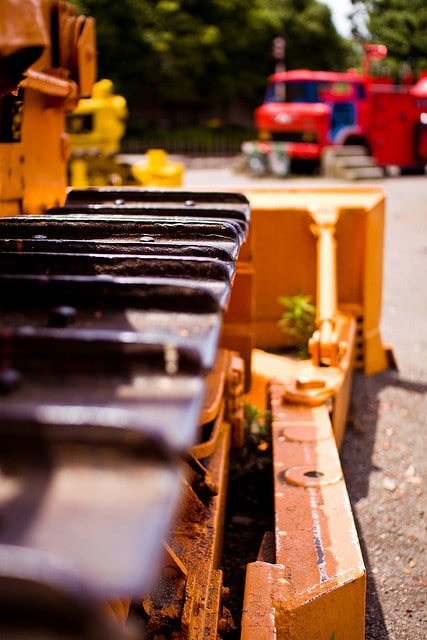 I can’t help but think how much my boys would have loved that park. All of my boys were fascinated with construction equipment in their early years. All of them love imaginary play. I imagine they would have spent many happy hours, playing out elaborate scenarios, at a park like that.

A park like that, of course, wouldn’t exist in the U. S. Liability concerns, you know.

But Haginaka Park seems positively tame when compared with the park Fusselman describes later. On her family’s first visit to Hanegi Playpark, aka Savage Park, she smells smoke and sees:

….a pink-painted piano at which a girl, five, was sitting and playing a John Cage-ian ditty….[and] open fires…a boy about eight years old was kneeling, poking at the flames with paper fans; at another, a father was sitting and roasting marshmallows with his toddler son. A third fire seemed to be unattended…

At the park, there are crudely constructed wooden structures — forts and platforms, even in the trees — constructed by children. There are “ancient mattresses,” perfect for cushioning the falls of children who leap from the roof of the playpark hut.

My boys would love this! , I think again. Meanwhile, I continue work on a blog post, defending kids’ need for recess. (Stay tuned; it should be out later this week.) I also continue to devour Fusselman’s lovely new book.

If you’ve ever wished children could have more freedom of movement, you might love this book. I strongly encourage you to check it out. Meanwhile….I’m going to see if I can schedule a BuildingBoys interview with Fusselman.

Until then, enjoy these pictures of Hanegi Playpark: 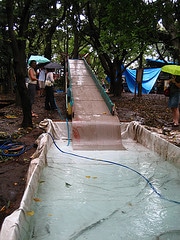 Photo by The Kozy Shack via Flick 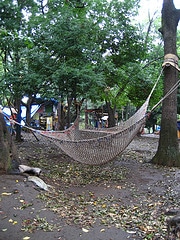 When you have a son, it’s important to build a … END_OF_DOCUMENT_TOKEN_TO_BE_REPLACED

DIY activities are one way to counterbalance … END_OF_DOCUMENT_TOKEN_TO_BE_REPLACED

When you have a son, it’s important to build a beautiful, meaningful … END_OF_DOCUMENT_TOKEN_TO_BE_REPLACED

Parenting is stressful. Wonderful -- and stressful. As a parent, you … END_OF_DOCUMENT_TOKEN_TO_BE_REPLACED