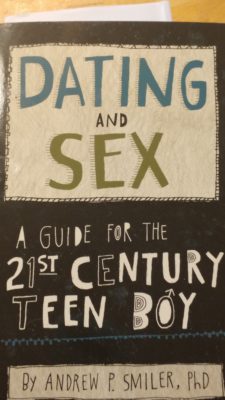 It’s hard enough to talk body parts and their intricacies with a fellow adult; discussing them with a teenager who’d rather have his spleen removed by tiny gnawing rodents than hear you say “penis” is a feat like no other.  — Heidi Stevens

It is not easy to discuss sex and dating with teen boys. That’s why I ordered a copy of Dating and Sex: A Guide for the 21st Century Teen Boy immediately after reading Heidi Steven’s review of the book. And why I reached out to author Andrew Smiler as soon as I completed my order.

Smiler  is a developmental psychologist and therapist who works frequently with teen boys and adult men. His book, he told me, is written in a how-to style that provides boys with a framework for understanding dating and sexual behaviors as they are today, as well as strategies that boys might employ as they enter the worlds of relationships and sexual activity. The book draws heavily from his academic research on normative aspects of boys’ sexual development, as well as his therapeutic work.

I recently asked him a few questions:

Who should talk to boys about these topics? Does it need to be an adult male?

AS: For most boys, the answer is someone they trust—regardless of that person’s gender. Boys want to know they’ll be taken seriously and have their questions answered honestly. However, there is a subset of boys out there who say it’s very important to have this conversation with a man, even if they don’t trust that guy completely.

When and how can I start talking to my boys?

AS: The simplest answer is now. If your son is asking how pregnancy happens – animal or human — that’s a great opportunity. Ditto if you’re attending a wedding. If your son is experiencing crushes and first attractions that appear around age 6, again around age 10, or once he’s a teen, then you have an “easy entrance” to the topic of relationships, even if only because he has noticed that “everyone” is talking about it.

As your son shifts from children’s cartoons to “family shows”, there will be plenty of opportunities to start talking about the characters’ relationships and sexual behaviors. These naturally-occurring events give you a reason to discuss why people choose to get married or have kids, the difference between parent-child and romantic/sexual kisses, and even why a couple might or might not hold hands in public.

These conversations do two things. First, they establish the topics of dating and sexual activity as something you can–and will–discuss. Second, they provide an opportunity for both of you to discuss your perspectives on what’s acceptable and at what age. In some ways, these conversations parallel discussions about money, education, or who your son hopes to become; discussion starts “small” in childhood and becomes more detailed as your child ages.

What happens if I’m talking and my son doesn’t seem like he’s listening?

AS: Keep going, especially if your son is a teen and you’ve never discussed these topics before. If you’re talking – without yelling or moralizing – he’ll understand that you’re available for conversation, even if he’s not ready to discuss things with you.

Conversations about dating and sexuality are often more awkward with sons than daughters because we usually teach our daughters to be aware of and describe their internal world – feelings, relationship dynamics, hopes and dreams – and we typically teach our boys to either ignore those aspects of their lives or not verbalize them. The result is that you might need to give your son permission and wording to discuss things that have never been discussed before.

AS: First, try not to freak out. If that means you need to walk away and take some deep breaths, that’s ok. He’ll probably also benefit from a chance to recover his composure.

How do I teach him to be respectful of his partner?

AS: Helping your son really understand respect and be respectful takes a lot of discussion and a lot of repetition, just like when you taught him to say “please” and “thank you.” You’ll need to give him a framework for understanding respect, whether that’s based on equality or being a “traditional” gentleman. You’ll need to help him understand the difference between respectful and allowed behavior, as well as differences between one situation and another, because the things that might be tolerated at home with a sibling or allowed with his friends might not be ok with his dating partner. 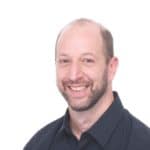 Andrew P. Smiler is a therapist and author living in Winston-Salem, NC. He is the author of two books on male sexual development, co-author of an Introduction to Men’s Studies textbook, and author or co-author of more than 25 journal articles and chapters. Dr. Smiler’s therapy practice is geared towards teen boys and adult men. Learn more about him and his work at andrewsmiler.com.