At age six, my youngest son — my innocent, cherubic-faced son — told me that his “rich, secret life” would include lots of tractors. And 1000 girls.

The tractors were no surprise. This boy has loved John Deere tractors and all kinds of heavy construction equipment from day one. 1000 girls, though? That surprised me.

What kind of girls, I asked?

He motioned me closer and whispered in my ear: “Sexy.”


At six-years-old, he had completely internalized the American ideal of female beauty. (By they way, he further added, “No glasses” to his list of requirements for the girls. When I pointed out that I wear glasses, at least on occasion, he told me I’m “not sexy.”)

As a woman, I’m disappointed. I’m disappointed and disgusted that our society’s version of beauty is so narrow and pervasive that even our prepubescent boys know exactly what flavor of eye candy should be hanging on their arms. As a mom, I’m disturbed. Is it my fault? Have I let him see too much? Because we do watch TV, and I’m not exactly strict about limiting his screen time to material best suited for kids 6 and under. Don’t get me wrong; I do keep tabs on what he watches, and more often than not, he’s watching something on PBS. (Wild Kratts, for  instance, is his favorite show.) But somehow, some way, my little boy has gotten the message that sexy women are desirable, and that sexy = not fat.

Yet is it surprising? Is there any way at all to miss that message in our culture?

The question is, how do we, as parents of boys, help our boys see past the stereotypes? How do we help them understand that women are for more than sex, and that a person’s worth does not depend on their physical appearance?

It’s tough. Our boys are clearly growing up in a sex-saturated culture that tells them that girls are good for one thing. (Or maybe more. Clearly, sex appeal is useful for selling cars also. And beer. And, well, Internet hosting companies. Did you see the GoDaddy ads during the SuperBowl?)

But I want my boys to know that women and girls are multi-faceted human beings, just like men and boys. I want my boys to value character, intelligence and integrity, not chest and ass and face. And sometimes, I feel like I’m fighting a losing battle.

Then I remember that the real world always holds more power than the fictional world held up by the media. And I remember that my boys are surrounded by many examples of strong, intelligent, capable women. And I think that, perhaps, that is the answer, that exposing my boys to all kinds of wonderful women will somehow broaden their definition of “woman.” Every day, my boys see complex, three-dimensional women, and I hope that they will gradually understand that a real woman is much more wonderful than the one-dimensional sex symbols flaunted in the media.

That’s one piece. The other piece of the puzzle involves combating the negative media images of women. I want my sons to know that what they see on TV and in magazines is not real, that even the women in the ads don’t look that way. So I show them videos like Dove’s Evolution video, which vividly shows the transformation of a woman into a flawless work of art. And we talk about photoshopping and unrealistic expectations and eating disorders. (Actually, we need to talk about these things some more.)

The next step is working toward a more positive and realistic representation of women in the media. Shortly after my son’s “sexy comment, I signed 8th grader Julia Bluhm’s petition to ask Seventeen magazine to include at least one un-photoshopped image in each issue. (Sad, isn’t it, that asking for once such photo is a major step!)

What are you doing to help your sons sort through the negative messages they receive about women from the media? 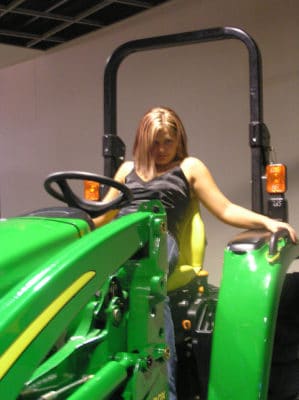 At age six, my youngest son — my innocent, cherubic-faced son — told me that his “rich, secret life” would include lots of tractors. And