How the War on Video Games is Hurting Your Son 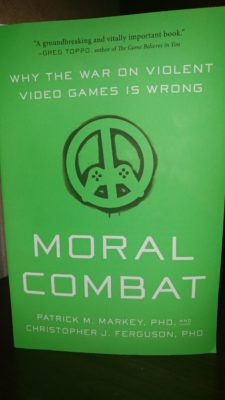 Patrick Markey knows video games. He grew up in the mid-1980s, during what he calls “the Golden Era of video games, when arcades were everywhere.” Today, he’s a gamer, parent and psychologist who has spent the last 10 years researching the effects of video games. He’s also co-author of the recently-released book Moral Combat: Why the War on Violent Video Games is Wrong.

We recently talked to Dr. Markey about his new book, and what parents need to know about video games:

The idea that video games — particularly violent video games — are harmful to our children is pervasive, despite the fact that a lot of research over the last 10 years or so has shown that’s not necessarily true. Why do you think the “video games are bad” message is so pervasive?

I really think it’s sensationalism. Take Sandy Hook. After that tragedy, reporters and the public found out that the killer had played Call of Duty. That’s not a surprising fact; 70% of adolescent males play violent video games. But suddenly that game got linked to the violence; that kind of headline sells newspapers. It’s not as easy to write an article that says, “A 30 year old women killed somebody and there were no video games found in her home.” That doesn’t sell. So we get this false illusion of a connection between video games and violence.

In a recent op-ed in the New York Times, “Video Games Aren’t Addictive,” you wrote,”The risk…is that by treating the immoderate playing of video games as an addiction, we are pathologizing relatively normal behavior.” Why is that problematic?

Parents who may have played video games a bit when they were younger but have now stopped, when they see their sons and daughters sitting in front of a TV and playing games, they often think that the kids are essentially watching TV. That it’s just a waste of time.

But really,  video games are so much more in children’s lives. They play with each other in games; in fact, kids more often  play socially than alone. But beyond that, even when the games are off, they serve as a common language. When kids are out in the schoolyards talking about building levels in Minecraft, it’s similar to watching a baseball game and then talking to your friends about your favorite players and so forth.

It’s not that video games themselves are good or bad; they’re just games. But because so many children play them, a child who doesn’t play may actually be at risk for social isolation.

It definitely could. If adults are criticizing  the one thing kids value and trying to prevent it instead of trying to understand it, there’s a real danger of disconnecting with your child.

Even if you don’t like video games, it’s still important to show children that you’re interested in what they do. I’ll give an you analogy: My kids play sports. And to be honest with you,  sometimes I find going to their games kind of dull. But I still go because it’s a time to support my children. You want to show that you’re interested in what they’re doing, so sometimes, I even play catch with my kids.Video games are the same. If a parent isn’t really interested in a video game, that’s fine. But simply sitting there and watching your child play — just like you’d watch your child play baseball — can be very beneficial. Playing with your child can lead to some great memories, even if you play poorly.

What would you tell parents who worry about the amount of time their boys play video games?

There are certainly some people who play video games to excess. The games might even be potentially harmful in their lives; they might get bad grades due to excessive video game play, for instance. But that doesn’t mean they have a video game addiction, at least not in the traditional sense of how we use the term addiction.

Any activity done in excess can be harmful to our lives. But there’s nothing inherent in video games that makes them any different than any other activity that can be done in excess.

What about “brain hacking,” the idea that people are specifically engineering games to draw us in and keep us playing?

That certainly exists, but that’s no different than anything else in our world where people are trying to sell a product. All products are designed to attract people to a certain product. The term “brain hacking” sounds really scary, but if I say  “Apple brain hacked their logo so that it’s appealing to us”, it doesn’t quite sound as terrifying. That’s all we’re seeing here.

Certainly, there are principles of psychology that are sometimes used in games as reinforcements and punishments. But again, that happens in other realms too. People are always trying to get us interested in products. It doesn’t mean it’s taking over our brains and controlling us.

What’s the harm is considering excessive game play an addiction?

It creates a stigma  around an activity — video gaming — that is normative. It creates problems because parents begin to think that a normal behavior might be bad or will cause trouble.

The other issue is that it may take away focus from what might be an underlying issue. Very often, when someone is playing video games to excess, it’s not the games themselves that are causing the problem. One of the examples  we discuss in the book is the case of a child who had recently been kicked out of school and didn’t have any friends. She turned to World of Warcraft, which gave her an immense social network.  Her parents just saw her playing video games and assumed that the games that were the problem. But when they removed the games from her life, things didn’t improve; removing games actually caused more problems because it destroyed the one social network she had.

Parents need to understand the games themselves. When we do research into who’s scared of video games and thinks they’re addictive, it’s almost always people who are older and don’t play video games. So educate yourself. Learn about the media and the games and how kids actually use them.

The other thing that’s important is balance. It’s not as simple as “every kid should play video games” or “children should not be able allowed to play video games for more than 2 hours.” Those one-size-fits-all rules don’t work. Every child is different. Some kids  might be able to play video games a little bit longer while they’re with their friends, whereas other children might play by themselves for an hour and then go outside for an hour.

One of the things you probably should not do is completely restrict video games. That usually ends in failure because you create a situation where you have anxiety and tension in the house. And ultimately, if you restrict video games, your child is not going to learn balance.

As parents, one of our jobs is to teach our children how to balance activities, so you may have to prod and teach them how to balance video game play with schoolwork. With yard work. It’s not easy, but the effort is worth it. The child who achieves balance tends to be the most psychologically healthy child. In fact, the research shows that the children who have the most issues are children who play video games a whole lot and children who  completely abstain from video games.