My 6-year-old son, a passionate, self-motivated learner got in trouble early in first grade. Why? Because he was squirmy and talkative and social. You can read more about it over at Boys and Young Men: Attention Must Be Paid.

Not even one month into the school year, my son got in trouble – major, Red-level trouble – for moving, talking and socializing. The school gets into no trouble whatsoever for failing to provide my son with a learning environment that engages him, that takes into account his needs and knowledge and learning style.

Not long after the red incident, my son came home with what looked like a massive black-and-yellow bruise on his lower abdomen at belt level. After some talking, I learned that my son found an unopened black walnut outside at recess. (Never seen one? They look like this: 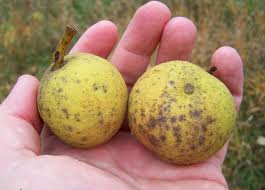 My nature-loving son wanted to play with them. But the bell was ringing, so he jammed one into the waistband of his underwear. His belt and jeans held the black walnut firmly in place, through at least half of gym class. And — as you may have guessed by now — stained his skin.

Later, I asked what he wanted to do with the black walnut.

Such a simple request. But he’s in an environment that a) only offers limited time outside, b) provides very little time for free play and c) frowns upon the throwing of objects. One month into the school year, my son has internalized those facts. And resorted to smuggling black walnuts in his shorts.

I tell myself he will be fine, and for the most part, he will. Fortunately, he still has two loving parents who read to him, who take him interesting places and who make sure he gets plenty of time in the woods and in fields. But I can’t help but wonder how much more interesting (and joyous) his learning path would be if he was allowed to follow his own interests, instead of squashing them in the service of organized, institutional learning. And I can’t help but feel sad inside for all the boys who know nothing more than school. In every school, there are boys, like my son, who are squashing their natural desires and curiosity to pursue educational goals that seem meaningless to them.

Some will say that little boys (such as my son) need to learn how to sit down, be quiet and follow directions. And I agree: they do. But I’d argue that the pace matters. I’d argue that there’s no harm whatsoever — and many benefits — to letting young boys (such as my son) learn through movement and active play and exploration. No harm at all in letting young boys gradually grow into self-control.

It will happen. I have seen countless, homeschooled boys grown into polite, well-mannered, socially-adjusted young men — without ever sitting in a circle on a rug, filling out countless worksheets or losing recess.

What are your thoughts regarding boys and school? 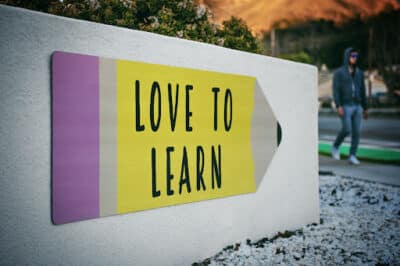 How You Can Encourage Boys To Love Learning At Home

Instilling a love of learning in your son is one of the greatest things you can do for him.  Some children gravitate towards learning, seemingly