Why You Need to Read “Moral Combat” 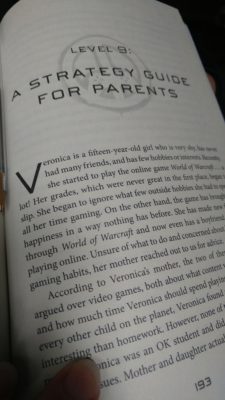 The answer, in 4 words: Because you have boys.

The answer, in 14 words: Because you have boys, and video games are a big part of boy culture.

The slightly longer, more philosophical answer: Because many of the things you think and know about video games just aren’t so.

The popular narrative around video games, since their creation, has been that video games are a waste of time (at best) and a negative influence on our kids and on society. Video games have been blamed for school shootings,for decreased empathy and for the increasing numbers of 20-something un- or under-employed guys who are living in their parents basement. We’re told that video games are designed to be addictive, and every single parent I know worries about video games. Our ancestors worried about unavoidable childhood diseases; we worry about the amount of time our kids spend in front of screens, shooting virtual representations of human beings.

And listen: these concerns reflect your love for your children. You want your kids to grow up in a safe, healthy environment, so you’re understandably alert for anything that could bring them harm.

THAT is why I’m telling you to read Moral Combat: Why the War of Violent Video Games is Wrong, by Patrick Markey, PhD and Christopher Ferguson, PhD. The authors examine the research regarding video games and their effects and deliver a startling, supported-by-science claim: Video games are not nearly as harmful as we’ve been led to believe. Not even the first-person shooter games or Grand Theft Auto. In fact, video games may not be harmful at all. We might actually be inflicting greater harm on our children via our cultural war against video games, by letting video games become a battlefield between us and our boys.

Please note: I am not a conspiracy theorist. I am a Registered Nurse-turned- freelance writer, which means that I have a healthy respect for science and a professional responsibility to question the validity of statements. My job requires me to carefully analyze information, including scientific studies. One of the things I’ve learned over the years is that not all scientific studies are created equal. Some are more reliable than others due to the sample size (the number of people studied, for instance) or study structure (a study that involves careful collection of data in real time — for example,  is generally more reliable than one that relies are participants to report their behavior). I’ve also become aware of the role politics and economics have on scientific research; put simply, there is ample funding available for certain studies and very little funding or support for studies which challenge the status quo or politically popular positions.

That, Moral Combat‘s authors say, is the problem with video game research. To date, most of it has been conducted by older academics who  aren’t personally familiar with video games. Many of the studies are poorly designed. Many of the supposed links between video games and violence, addiction and lack of motivation are not nearly as robust as we’ve been led to believe. But dramatic stories sell papers and garner clicks, and a focus on video game violence allows our politicians to dodge responsibility to address some of the deeper societal issues that lead to violence, addiction and apathy.

You want the best for your kids. I do too. So before you make any new policies or procedures regarding video game use at your house, read Moral Combat. You owe it to your boys– and yourself — to make sure you’re basing your decisions on solid scientific facts.

Need another reason? Chapter 9 (Level 9) is “A Strategy Guide for Parents” and provides common sense guidelines you can use to create sane video game policies for your family.