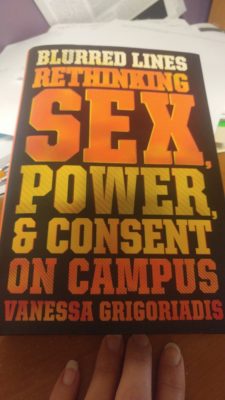 It’s not easy to talk about sex, consent & rape. It’s not easy to read, write or think about those topics either. And that’s the real reason why this post is coming a full 2 1/2 weeks after I announced Blurred Lines: Rethinking Sex, Power, & Consent On Campus as BuildingBoys’ most recent book club pick.

I read the whole book in a just a few days. I’ve been thinking about it since. And I still really don’t know what to say, because this whole issue of sexual assault on (and off) campus is messy and complicated. The oft-repeated “1 in 5 women are sexually assaulted in college” statistic is questionable and based on an expansive definition of sexual assault and a study that’s been criticized as non-representative. Far more often that not, allegations of sexual assault are difficult to definitively prove or disprove, because the vast majority of such incidents occur in private, between two people. Alcohol or other substances are quite often a factor.

But this much is clear: Young people are being hurt.

At the risk of sounding like a fuddy-duddy, one of my biggest takeaways from the book is this: Today’s teenagers and young adults have some pretty warped ideas about college and sex. Consider these quotes:

Fueled by a culture that portrays partying, drinking and sex as what you do at college, college kids today are doing just that. Our almost-grown kids have soaked up the messages that surround them, rather than the messages we wanted them to absorb. We may tell our kids to “respect others,” and “wait ’til you love someone,” but that’s not what our kids see and hear every day, and not what’s valued or cool. A lot of kids are going to college to party & have sex, because that’s what we’ve essentially told them (via our movies, music & stories) college is all about.

That’s the culture our kids are living in, the culture they have to navigate. Which leads me to my biggest takeaway from the book: If we want to halt sexual assault, we need to start teaching our kids about healthy relationships. About the value of hard work, respect and responsibility. About moderation. About the joy that comes from connection, vs. the hedonism of disconnection. We can’t just talk about these things, either. We need to show our kids, through our own lives, that there’s joy & pleasure in healthy relationships, in moderation, in hard work. And we need to start when our kids are young. As Brett Sokolow, executive director of ATIXA (Association of Title IX Administrators) says, “A student arriving on campus at eighteen is already socialized in the norms and problematic beliefs of America.” If we’re serious about eliminating sexual assault and harassment, we need to change those norms and problematic beliefs.

In the meantime, our boys need to know:

I’ll be honest: I was confused, flustered and overwhelmed when I finished reading this book. So much of what’s happening on (and off) campus sexually is so far from healthy that I hardly know where to start. As uncomfortable as it is to read, think, write and talk about sex and consent, these are conversations that have to be had.