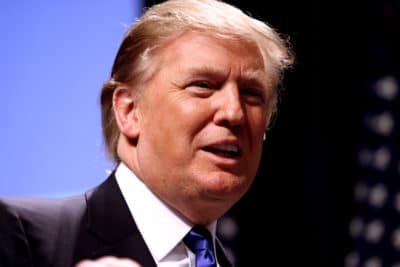 The news is impossible to miss: Donald Trump said, on tape, that he grabs women by the pussy. That he kisses them without consent.

Our kids are hearing his story too. The older ones see it and hear it in their social media feeds, just like we do. Younger ones hear snippets of it on the news as we drive in our cars and on TV and in our conversations with our friends and relatives. The information, the conversation and the words are out there. Our children need us to provide context. To guide them. And to help them untangle the mixed messages they’re getting from society right now.

Here’s how to talk to your boys about Donald Trump:

Listen carefully to your kids’ comments. Depending on their age, maturity level and intellect –and whether or not they spend a lot of time with older kids or adults — they might be blissfully unaware of the whole thing. Or they might have already heard words they don’t understand.

With kids this age, it’s best to follow their lead. If your child says something negative or positive about Trump, ask them to tell you more. Their response will give you more info about what they know, and will help you tailor your response. Provide age-appropriate, accurate information — and remember that kids this age are very literal thinkers. When Trump first began talking about his proposed wall, some children thought the wall might be around their house.

Preschool age is also a perfect time to discuss consent. Let your child know that no one should touch his body without his consent, and that he should not touch anyone else unless they are okay with it.  Then, live those lessons. Don’t require your children to give hugs to relatives; if your child is not comfortable, respect the child’s wishes, rather than teaching him to override his own preferences and instincts in favor of what someone else wants. Similarly, teach your child to ask before hugging or kissing friends. Little kids won’t always get this right; sometimes, in their exuberance, they simply run over and hug someone without thinking. If that happens, especially if the other child is upset by your boy’s actions, teach him to apologize, and talk to him about the situation. Help him brainstorm creative ways to show affection, and encourage him to take a moment to breathe before acting.

Role model respectful behavior and conversation. If you call another adult a “jackass” or “hot piece of ass” or “idiot,” your child learns that it’s OK to use such language. Do your best to surround your child with positive role models.

It may be time for a vocabulary lesson. As the Washington Post reports, kids are young as 6 are now asking their parents, “What does it mean to grab someone by the pussy?”

Don’t dodge such questions, if they arise. While it may be very uncomfortable to talk about sexual anatomy with a first grader, a child who is asking deserves an answer. You can tell your child that “pussy” is a not-very-nice word some people use to refer to the vagina, or women’s private parts. (Use language that your child is already familiar with.)

Then, talk about consent, in words that make sense to your child. Talk, again, about how it’s not OK to touch people who don’t want to be touch. Talk about how you respect your boy’s need for personal space, and how he does the same for his friends and family.

Depending on your child, and what he’s heard, you may also need to explicitly talk about the fact that is not OK to just kiss someone, no matter how beautiful they are. If your child has heard this part of the Trump tapes (in which he says, “You know I’m automatically attracted to beautiful — I just start kissing them. It’s like a magnet. Just kiss. I don’t even wait.”), this might be a good time to talk about the fact that it’s perfectly normal to feel attracted to beautiful girls, but that it is never OK to kiss someone without asking them. (“Consent” is a pretty sophisticated concept for this age group, so keep things as simple as possible.)

If your tween has a smart phone or an Internet connection, they’ve already heard the Trump story. They may well have listened to the recording, may have heard Donald Trump discussing women and non-consensual, sexually-abusive touching with an air of self-satisfaction and entitlement. So now is the time to talk about cultural expectations and standards for men and women, males and females.

That society objectifies women is not news, at least not to those of us who are female. That our boys are growing up in this culture — one that teaches them to objectify women — is also not news. (It’s why my then six-year-old son told me that his “rich, secret life” includes “1000 sexy girls”.) And frankly, the fact that some men think and talk about women the way Trump has is also not news.

What we, as adults, need to consider is that our sons are learning that this– objectification of women, male entitlement to beautiful women — is normal. Because it is so prevalent and so pervasive, they really do not know that it is not okay, unless we tell them so. We need to be explicit with our tweens, and let them know, again, that is not never OK to touch someone without consent. We need to explicitly say that wealth and power do not give someone the right to touch others. And we need to let our boys know that what Trump describes in that recording is not simply “locker room talk,” as some have claimed, but illegal.

It’s also a good time to begin equipping our boys with phrases they can use to speak up if/when they hear another boy talking disrespectfully. Some possibilities: That’s not cool. It’s not cool to touch someone unless they want to be touched. Dude, enough already!

Finally, make sure your boys know that they should seek help if another boy or man is hurting or harassing another person.

The sad truth is that Trump’s words likely sound very familiar to many of our teens. Not all boys and men do not speak like this, but some certainly do. Here’s Scott Baio on FOX News, talking about Trump:

He talks like a guy. Ladies out there, this is what guys talk about when you’re not around.

Truth is, many men objectify women and say outrageously offensive things about their breasts, butts and other body parts in spaces we occupy with each other. In his response to the video’s release, Trump explained that his comments were “locker room banter.” His is a “boys will be boys” defense of sexism and the objectification of women, but he wasn’t incorrect that some men do, indeed, talk that way. And such talk is not confined to gyms and country club showers, but occurs too often in other spaces where men are among other men — in fraternity houses, on golf courses, in barbershops, at bars. I have even seen men stand aside and engage in this kind of talk about moms at kids’ birthday parties.

…the kinds of words we heard from Trump are commonly spoken when men are with other men. Those who participate in this “banter” are rewarded. Those who choose not to engage, and especially guys who critique such statements, have their masculinities questioned and risk being placed on the outskirts of social acceptance.

Think about that. Reflect on that. That is our boys’ reality. That is why, in my post, A Better Way to Talk About Rape Culture, I advocated for listening to boys. Before we can re-direct our boys’ behavior, we have to understand their worlds, and they need to know that we understand and respect the challenges they face.

Yet somehow, we have also got to let our boys know that it’s not okay to talk this way, nor to simply ignore, shrug, or laugh off such comments from other men. As Harper writes,

When men fail to challenge other men on troubling things they say about and do to women, we contribute to cultures that excuse sexual harassment, assault and other forms of gender violence.

That’s some really, really deep, really tough stuff for a teenage boy to understand. You won’t cover it all in one conversation, especially because, best case scenario, you might get a few minutes and 2 or 3 sentences in before your boys shuts down what is likely to be an uncomfortable conversation.

Still…try. Ask your teen what he thinks of these recordings and the reactions; his answer will show you where his mind is at the moment. Instead of lecturing him, ask his opinions first.

Reiterate, whether he wants to hear it or not, that kissing or touching someone without consent is a crime. And encourage him to speak up when he hears other boys talking this way. If he’s open to it, brainstorm phrases and responses he can use. But remember this:

….confronting male peers is difficult for a 14-year-old high school student-athlete who desperately wants his teammates to like and accept him. He needs his coach to step up and disrupt locker room banter. — Shaun Harper

It is extremely difficult and socially risky for teen boys to speak out against such talk and behavior. That doesn’t mean it’s OK for you or your son to remain quiet. It means that it’s important to be sympathetic to the pressures he faces, to realize that he might not make the “right” choice at all times, but that he’s not necessarily a bad person if he doesn’t start leading marches against rape culture.

It also means that is crucial for us, as adults, to set a good example. It means that we need to hold our coaches, educators, youth leaders and ourselves to high standards. It means that WE have to speak up when we hear people saying things like Trump did, rather than smiling or ignoring it.

Have the Trump tapes spurred discussion within your home? I’d love to hear about it. Leave me a note in the comments below.