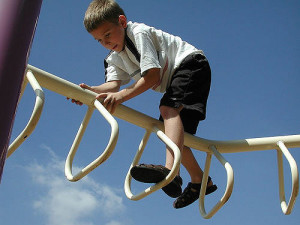 Do you have a risk taker in your house? You know, one boy who insists on climbing to the top of the swingset, then jumping down? Or one who’s always building the bike ramp higher and higher, pushing the limits of safety?

Where does he fall in birth order? Based on the research, I’m going to guess he’s not first.

According to a study published in Personality and Social Psychology Review, younger siblings are more likely to take risks. The authors reviewed Major League Baseball data (how’s that for a cool data set?) and found that younger siblings are 10.6 times more likely to attempt to steal a base — a risky behavior, at least in the game of baseball. Younger sibs are also more likely to be hit by a pitch, which the researchers believe may reflect a refusal to be intimidated. (Or to back down?) They also reviewed previous studies and found that later-birth order children are almost one-and-a-half time more likely to participate in a dangerous physical activity, such as football or skydiving.

My kids aren’t old enough for skydiving, but based on limited experience, I’d say the study is right on. The climb-to-the-top-of-the-swingset example at the top of this blog post is cribbed directly from my life. Boy #3 first climbed the park swingset at age 5. By age 4, he was riding a bike without training wheels and skateboarding down the incline of my neighbor’s driveway. My oldest son didn’t even touch a skateboard until he was 8 or 9.

All three causes seem plausible, but I think the experts are missing one big one here: parental experience/benign neglect. With our first children, we tend to freak out over every. little. thing. If the Cheerio drops on the floor, we quickly whisk it away. If he approaches a skateboard at age 3, we redirect him to a more age-appropriate toy. But by the time there are two kids on the scene, we’ve learned to relax a bit. A combination of parental experience and lack of time (because, really, who can hover when there’s a toddler and preschooler running around the house?) generally leads to a more relaxed style of parenting, a live-and-let-live attitude that gives kids the freedom to try things. Other parents freak out when my boys climb ever higher in the tree. This many kids into it, I trust them enough to let them try. I also, to tell you the truth, would rather spend my time chatting with other parents at the park than harping at my kids to stay out of the trees. See what I mean by benign neglect?

What about you? Are your younger boys more likely to take risks? Why (or why not)?

None of us expected this pandemic, save maybe a … END_OF_DOCUMENT_TOKEN_TO_BE_REPLACED

You are not the only one who is overwhelmed by … END_OF_DOCUMENT_TOKEN_TO_BE_REPLACED

When it comes to safety, we can do much to support … END_OF_DOCUMENT_TOKEN_TO_BE_REPLACED

How are you talking about coronavirus with your … END_OF_DOCUMENT_TOKEN_TO_BE_REPLACED

None of us expected this pandemic, save maybe a few epidemiologists … END_OF_DOCUMENT_TOKEN_TO_BE_REPLACED

You are not the only one who is overwhelmed by homeschooling. I … END_OF_DOCUMENT_TOKEN_TO_BE_REPLACED