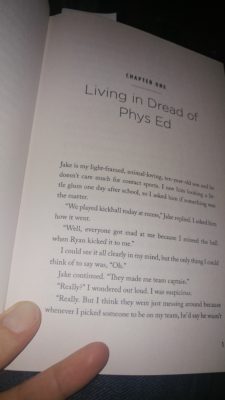 I’ve never been a boy, but boy do I know all about being the last kid picked!

I was always non-athletic. (In fact, until very recently, I still described myself as “one of the most non-athletic people you’ll ever meet.”) I wasn’t interested in sports and I wasn’t good at sports. Likely, those two things were related. Also related: the fact that neither of my parents are particularly athletic and that I was born, in the 1970s, to parents who occupied very traditional gender roles; I don’t think it occurred to either one of them to sign me up for T-ball or softball. Add in my perfectionistic nature — the fact that I don’t even want to attempt something unless there’s a very good chance I’ll be good at it — and perhaps you can see why I spent 12 years hating gym class. Funny: It has now been more than 25 years since I graduated from high school, and I got a funny feeling in my gut right now, writing that sentence. Twenty-five years later, my body still remembers the anxiety, fear and shame.

So maybe that’s why Janet Sasson Edgette’s book, The Last Boys Picked: Helping Boys Who Don’t Play Sports Survive Bullies and Boyhood, appealed to me. Truthfully, though, I picked up her book because I want to learn as much as I can about boy culture, about the world our boys inhabit on a daily basis. I wasn’t expected the book to affect me personally.

Then I opened it. Chapter One: Living in Dread of Phys Ed.

Immediately, I was catapulted back into my own experience. I remembered, viscerally, how much gym class sucked and how much I hated being singled out (as terrible). I remembered what that felt like, for me as a girl, over two decades ago  — and knowing what I know now about the world and boys, I imagine that things are likely even worse for non-athletic boys today. Sure, kids of all genders have more extracurricular opportunities today than we did back then, and even gym class has evolved; today, it includes yoga and video game dance competitions, and dodgeball has been all but banned. But as a mom of boys, I know that physical prowess is still prized. I know that the popular boys are still, far more often than not, athletes, and that the popular kids still, for the most part, set the standards for what’s acceptable and okay.

And as a parent, I see, hear and feel the many ways in which boys and their parents cope with the resulting pressure. I’ve heard parents wonder aloud if they should sign their son up for a sport, even though he’s not really interested, just so he’ll get some experience (or maybe learn to like it). I’ve heard parents coach and berate their boys from the bleachers, and seen boys’ confidence crumple. I’ve seen boys, dejected, at the end of the bench, game after game after game.

I’m only one chapter into The Last Boys Picked, but my opinion so far is this: This book should be required reading for all parents, teachers and coaches of boys. Because even if your boys are gifted athletes, they interact daily with other boys who are not. So do you. It’s on all of us to understand, respect and defend the rights and interests of boys who don’t love sports — and the fact that I even have to say that says a lot about how highly our society values athletics and athleticism.

Are you reading along? How far are you? What do you think of the book so far?

Over 30 million adolescents play sports in the … END_OF_DOCUMENT_TOKEN_TO_BE_REPLACED

What about school? is the question on everyone's … END_OF_DOCUMENT_TOKEN_TO_BE_REPLACED

I have spent two decades working on raising boys … END_OF_DOCUMENT_TOKEN_TO_BE_REPLACED

My oldest son wasn't yet two when Raising … END_OF_DOCUMENT_TOKEN_TO_BE_REPLACED

Over 30 million adolescents play sports in the U.S. alone. Sports are … END_OF_DOCUMENT_TOKEN_TO_BE_REPLACED

What about school? is the question on everyone's minds right now. It's … END_OF_DOCUMENT_TOKEN_TO_BE_REPLACED