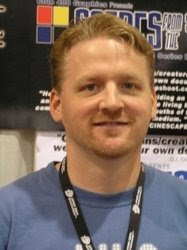 Wisconsin-native Rich Koslowski has worked as a comic book and graphic novel writer and illustrator since 1996. He’s best known for his series The 3 Geeks and the two graphic novels Three Fingers and The King. He has been nominated and won many of the comic book industry’s most coveted awards including the Eisner, Harvey and Ignatz awards. You can view Rich’s works at his website RichKoslowski.com.
What was your first comic book?

I actually remember this because it was such a unique and tragic day in my life! My dad had a butcher shoppe inside of a PDQ grocery store and they had a magazine rack that also carried comics. We’d go to the store quite a bit to shop, of course, and visit my dad. While there I first discovered comics.

I was attracted to this wonderfully dynamic cover of this massive green monster fighting an equally massive orange rock-skinned monster inside of a boxing ring! I was mesmerized. Completely lost in the pages and simply HAD to have this thing (Coincidentally it was “The Thing and The Hulk” fighting it out on the cover). So I urgently begged my mother to buy it for me, which she did. This was before a trip to the dentist.

I sat reading my new magical object when I was called in for my exam. I left the comic there with my mom. After a cavity (or 2) was discovered, I was gassed, drilled and then woozily released back to my mother’s waiting arms with her empathetic promise of some ice cream (after the filling set of course).

We left and I was too out of it to remember to grab my comic! By the time I remembered we were long gone and my mom said what any mom would, “Oh Richie, it was just a 35¢ comic book. You can get another one the next time we go to the store.”
Of course that comic wasn’t there any more the next time we went back. Sigh. But there were others!

The rest, as they say, was history.

Fast forward 25+ years and I come across an old ad in an old issue of Marvel Premiere and there it was! The cover ad for that first comic! All the memories flooded back. And now I had the issue title so I could seek it out at the next comic convention I would attend. And I did. MARVEL SUPER-STARS #1. Paid $7.00 for it. It now proudly adorns the top shelf in my comic room.
When and how did you get really interested in comics?

Yes, from very little on. And I can distinctly remember having “that moment” in the fourth grade when I realized that I was going to be a comic book artist when I grew up. Not “I want to be” but “I’m GOING to be!”
I was a very, very active kid and was outside running around all the time but when I was inside I had a pencil in my hand, and my face two inches above a piece of paper with my tongue sticking out deep in concentration.
Were you a good student in school? Did you like reading/writing/art assignments in school?

I was good if I liked the subject. If not I was bored and uninterested. I always scored very high on the aptitude tests but was the classic underachiever–much to my teachers and parents chagrin.

It depended on the teachers, too. If I connected with a teacher then I excelled. And yes, I always loved art, of course, but as I developed as an all-around “creative type” I discovered that I also loved to write. I can remember really busting out around freshman year in high school and by the time I was a senior I was acing English.

In college I had a professor who encouraged me to pursue a career as a writer but I was still more focused on the art side of it all. Now I tend to prefer the writing aspect more than the art aspect when I do my books.


I was also very good in Math and science. Phy Ed too. It was a good outlet for the massive amounts of energy I had.
How did you get into the comic book industry?

In a weird way actually. I always wanted to get into comics but it’s a very difficult business to get your foot in the door. Very competitive.

I was working at an animation company in Franksville, WI where we did a lot of TV commercials (remember Stubby Heiser?) and some storyboarding for some big companies out in Hollywood. One of those companies was doing the SONIC THE HEDGEHOG cartoon and we did the storyboarding. DIC was the company. Anyway, they liked the way we did the art on Sonic and asked ARCHIE COMICS to hire us to do the comics. I didn’t even know Sonic had a comic!

The next thing you know, me and my boss, Art Mawhinney, were doing the pencils and inks on Sonic. And that comic was hugely popular.


After that I decided to self-publish my own series about comic book collectors called THE 3 GEEKS. It was an instant hit and a critical success. This all stared for me back in 1996.
What advice would you have for other boys who may want to get into the industry?

You have to have perserverence! And thick skin. And, of course, the talent.

But there are a lot of artists out there with “talent” who just can’t seem to make it. They either lack confidence or the necessary work ethic. You have to meet the deadlines or you’re dead. No matter how talented you are if you don’t perform it’s over.


Perserverence is a must! You’re, most likely, going to be rejected more than accepted by potential publishers. Believe me. You have to be able to tough out the criticism, work on getting better–constantly honing your skills–and keep submitting your samples to the publishers.

Also, look into self-publishing, like I did. Many, many of the top artists started out as small self-publishers. If you can make a name for yourself at the “indy” level the big publishers will eventually take notice.
What would you say to parents who consider comics “trash” or a “waste of time?”

I’d say they’re wrong. Dead wrong. Comics are a fantastic way to get children interested in reading. And there are so many quality comics for kids available. And then, just like I did and millions more comics fans like me, I kept graduating to more sophisticated comics. I matured with the comics.

There are so many sophisticated, brilliant comics that cover so many genres and subjects. It’s not just men running around in spandex anymore. And most of the “spandex” comics have elevated their levels of quality too over the years as the fans have become more sophisticated.

Sure, there are some badly written or poorly illustrated comics out there but there are also a lot of bad novels, movies, and TV programs out there too. But to generalize that all comics are bad is just wrong.


Neil Gaiman (popular best-selling comic writer and novelist) put it very well in an interview one time when he said, “Why is it that people respect paintings that hang in a museum and books on the library’s shelves, but when you combine the two things–the art and the written word–and create a comic book or graphic novel people turn their noses up at them?”
I’m paraphrasing but that’s basically what he said and it’s so true. I wish I’d made that analogy.
The following two tabs change content below.

Learning during a pandemic is challenging.  Hell … END_OF_DOCUMENT_TOKEN_TO_BE_REPLACED

We covered a lot of ground on ON BOYS parenting … END_OF_DOCUMENT_TOKEN_TO_BE_REPLACED

Over 30 million adolescents play sports in the … END_OF_DOCUMENT_TOKEN_TO_BE_REPLACED

What about school? is the question on everyone's … END_OF_DOCUMENT_TOKEN_TO_BE_REPLACED

Learning during a pandemic is challenging.  Hell -- LIVING during a … END_OF_DOCUMENT_TOKEN_TO_BE_REPLACED

Over 30 million adolescents play sports in the U.S. alone. Sports are … END_OF_DOCUMENT_TOKEN_TO_BE_REPLACED