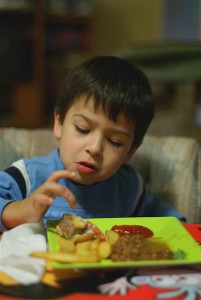 None of my sons are a gourmand’s dream. Each will hesitate at the sight of new food — and by “hesitate,” I mean “politely (or not-so-politely) refuse to try.” None of them are big fans of mixed foods, like casserole, even if they like all of the individual ingredients. (My boys all like ham, cheese, noodles and broccoli — but mix those basic ingredients up in a casserole, and none of the boys will do much more than take the requisite taste.) Their list of OK foods is pretty narrow: pizza, burgers, spaghetti, pork chops, chicken nuggets, sandwiches, cereal…you get the picture.

Part of it, I assume, is my fault. I’m not the most adventurous eater either. I was well into my twenties before I tried a non-Italian, non-Mexican ethnic food. Even then, I had to make a conscious effort to focus on the overall taste, and not think, “what is IN this thing?” (because God forbid if it contain an ingredient I didn’t like!). To this day, I’m not a big fan of veggies and I really, really don’t like fruit — as in, I have a weird aversion to fresh fruit. If I actually force myself to eat fruit, I’m able to admit that the taste isn’t so bad — and may actually be good. But overcoming the mental hurdle is more effort than I’m usually willing to put in. Luckily, my boys haven’t inherited my fruit aversion. All of them enjoy multiple fruits; my oldest, I think, could live on fruit.

The idea that my boys might have inherited some of my food quirks, though, is not so far-fetched. A 2007 New York Times article reported on a research study that indicated that 78% of kids’ receptiveness to new foods appears to be genetic, while 22% is environmental.

Interesting, right? Yes. But ultimately, not helpful, because what we all want to know is how to a) make sure our kids get a balanced diet and b) help our kids enjoy food.

Techniques I’ve tried, with little to no success:

Now Elizabeth Pantley, author of the No-Cry Sleep Solution and other No-Cry parenting books, has published the No-Cry Picker Eater Solution. I appreciate her intent, as well as the fact that there’s a huge audience for this book. I just don’t think that most of her advice is going to work for my boys. Check out this excerpt:

~ Put vegetables on a pedestal.
It’s an odd fact that while vegetables are a healthy cornerstone of any diet, they are usually relegated to a back corner side dish. While interesting recipes appear for main dishes, the vegetables are often steamed or boiled in a routinely boring presentation. Start treating vegetables as the star of the meal and your kids will too.

~ Name the star of the show.
Vegetables rarely get the spotlight. When kids ask, “what’s for dinner?” we name the meat and starch – “Chicken and rice” or “Steak and potatoes” and don’t even mention the vegetables. From now on, name the veggies first. Create a fun name for the vegetable of the day you can help your children view them in a different light. So, what’s for dinner? “We’re having Brilliant Bunches of Broccoli along with chicken and rice.”

Would your boys be tricked by “Brilliant Bunches of Broccoli?” I don’t think mine would. Besides, my boys already like broccoli. I need help with the chicken! (For some reason, despite the fact that I serve it often in a variety of different ways, my boys tend to think of chicken as a “weird” food.)
~ Search out new recipes for veggies.
Try stir-frying a mix of veggies with olive oil to give them an attractive presentation and a unique flavor. Add a sprinkling of nuts or seeds or a dribble of sauce. Mix two or even three kinds of vegetables together for a colorful dish.

See blog post paragraph #1. My boys don’t like (read: “won’t touch”) mixed-up foods.
~ Get artistic.
It can be fun to serve vegetables in interesting containers or arranged colorfully in patterns or shape.

It can be a lot of work to artfully cut up and arrange veggies that my boys aren’t going to eat anyway.
~ Let them dip ’em.
Serve a platter of raw veggies with dipping sauce such as ranch dressing, yogurt or hummus Kids often prefer raw vegetables over cooked, especially if they can dip.

The only dip my boys like is ketchup. They still consider ranch dressing and hummus exotic, “weird” foods. Yogurt is OK, but the only thing they’ll dip in it is fruit (after the yogurt has been mixed with peanut butter.) They do like raw veggies better than cooked veggies, though.

~ Give kids a choice.

Yep. It will also double the odds that I end up wasting twice as many veggies.
~ Get sneaky.
While you are teaching your child about nutrition, go ahead and hide some vegetables within other recipes to up your child’s daily quota. It’s easy to add chopped spinach to hamburgers, pureed squash into macaroni and cheese, crushed cauliflower into mashed potatoes, or bits of carrots and broccoli into spaghetti sauce. That way your kids get the benefits of vegetables no matter what.

Despite my boys’ reluctance, I refuse to hide veggies. Isn’t the point to teach them to enjoy multiple foods. Won’t hiding the “good” foods just teach the kids that the food in question really is yucky? (I mean, do you traditionally hide your good china? Or good clothes?) And won’t they just then be more suspicious of any food that you make? Because I’m sure that at least one of my boys would figure out what’s up.

So parents — How do you deal with picky eaters?

None of us expected this pandemic, save maybe a … END_OF_DOCUMENT_TOKEN_TO_BE_REPLACED

You are not the only one who is overwhelmed by … END_OF_DOCUMENT_TOKEN_TO_BE_REPLACED

When it comes to safety, we can do much to support … END_OF_DOCUMENT_TOKEN_TO_BE_REPLACED

How are you talking about coronavirus with your … END_OF_DOCUMENT_TOKEN_TO_BE_REPLACED

None of us expected this pandemic, save maybe a few epidemiologists … END_OF_DOCUMENT_TOKEN_TO_BE_REPLACED

You are not the only one who is overwhelmed by homeschooling. I … END_OF_DOCUMENT_TOKEN_TO_BE_REPLACED