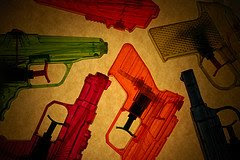 After I wrote about the contents of our toyroom, another boy mama wrote in with a question:

OMG! My son just (to my horror!) discovered … guns! It’s a total fixation since we were visiting another pal of mine with an older boy. I’m hoping it passes. I’m a big fan of gun control … even the toys ones. Any advice for steering a 3 yr old away from the firearms?

She reminds me of me eight short (or is that long?) years ago.

Our oldest son was three, and up to that point, we’d sheltered him from toy guns. I grew up in a no-toy-gun household, even though I had four brothers; our squirt guns were animals or empty syrup bottles, never miniature guns. My husband was a former Marine (and an excellent shot), but I saw no need for my son to PLAY with something meant to cause death and destruction.

Then we moved into our house. The house came with excellent neighbors, but with the neighbors came toy guns. My son loved them — the neighbors AND the guns.)

What was I to do? If I banned toy guns all together, my son would be left out of most neighborhood games. (Did I mention the high boy population in my neighborhood?) And even if I banned them, the damage was done: he’d seen the guns and he wanted one.

My husband — a former boy himself — advised me to not make it a big deal. Make it big deal, he said, and you’ll only make things worse.

So I nervously watched while my innocent child played guns. I drafted an essay about his fascination with guns, and breathed a sigh of relief a few days later when I wrapped it up: After days of intense interest, the plastic gun lay forgotten next to the toy box while my son once again watched Elmo.

If only I was to be so lucky.

That same son is now 11, and his favorite channel on TV is the Military Channel. Guns are no longer his weapon of choice; he’d much rather wield a light saber when saving the world. He does, however, have a BB gun and pellet gun and enjoys shooting targets in the garage.

So no — I don’t have any advice for steering a three-year-old away from guns. I do have some reassuring words, though. A fascination with guns does not mean your son is going to turn into a crazed homicidal maniac. It doesn’t mean that your son is someday going to shoot up his school. It doesn’t even mean he’ll become a hunter.

Lest you think I’m making this up, the research backs me up on this one:

What do you think? Do you think playing with guns inspires violence? What’s the gun control policy at your house?