What do your boys know about the world of business?

Most boys (mine included) are excellent consumers, thanks to the miracle of television ads. But what do they know about the other side of the transaction? Do your boys have any idea what it takes to develop a product, start a company or sell to other people? It’s not a crazy question. As Robert Kiyosaki, author of Rich Dad, Poor Dad, points out, your son will never get rich working for other people.

I understand that “rich” may not be all you hope for your son. Most of us want our sons to be happy, healthy, well-rounded people, despite the size of their bank accounts. Understanding the basics of business, though, gives your son an edge in today’s economy, no matter what. There’s something to be said for understanding why your boss does what he does. There’s even more to be said for knowing how to land on your own two feet when your job is yanked out from under you –which brings us back to business.Son #1 is blessed with an entrepreneurial bent. At the age of four, he picked a handful of dandelions and asked to sell them in front of our house. I almost said no. I mean, people pay people to get rid of dandelions! Moms and grandmoms have been oohing and aahing over dandelions for years, but that doesn’t mean they’ll pull over to buy some.

I didn’t say no, though. I bit my tongue, helped him make a sign and carried a table out to the front lawn for him. Before I knew it, my boy was in business. People stopped! The newspaper came and splashed his picture across the front page. (Yes, we live in a small town.) One woman even sent him an anonymous card a week later, saying how much he reminded her of her sons at that age. She enclosed five dollars.

My son, to say the least, was thrilled. I was dumbfounded. My boy learned some important lessons about customer relations, and I learned to keep my mouth shut. My role isn’t to squash my boys’ dreams; my role is to support and facilitate.

Fast forward eight years. By age 12, my oldest son was known around town for his business sense. He sold produce at the local Green Market for six years; for the last two years, he purchased his own space. He also started a tulip business; the 40-odd bulbs he originally purchased and planted in the garden have multiplied, bringing him $40-$50 each year. Not a bad return on investment, eh?

Have any of your boys started a business? I’d love to hear about it! 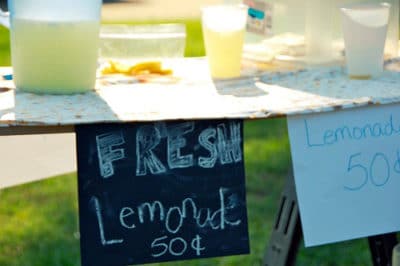 What do your boys know about the world of business? Most boys (mine included) are excellent consumers, thanks to the miracle of television ads. But