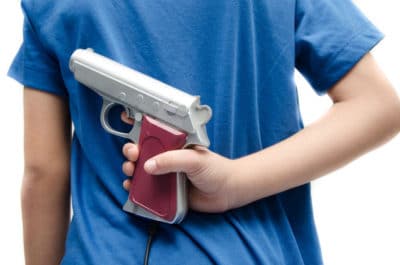 The 16-year-old California boy shot a classmate who allegedly bullied him.

The main story line — boy brings gun to school and shoots — is, sadly, not a new one. We have seen and heard this story before, far too many times. And whatever your stance is on guns, parenting, boys, education or bullying, I think we are all, as Jon Stewart said, anti-massacre. No one wants the shooting and killing of innocents to continue.

But gun violence, and violence in general, is a complex problem, and unlike some people, I don’t believe that simply enacting gun limits and legislation will solve the problem. The problem goes deeper than that. And a complex problem deserves a complex approach.

When I ponder these shootings, it occurs d to me that perhaps I need to explicitly tell my boys that shooting someone who bullies you is not right. It’s the kind of thing that I hope doesn’t need to be said, but as I see and hear stories of boys doing incredibly stupid things (shooting classmates, allegedly raping unconscious girls) it occurs to me that it might not be safe or prudent to assume that my boys just “know” not to do those things.

Besides, I’m beginning to think that our words matter far less than our actions, when it comes to parenting kids.

You’ve seen that phenomenon play out in your own family already. Surely you’ve noticed that your kids are far more likely to do what you do (say, eat potato chips and pizza) than what you say (load up on veggies and fruits.) For better or for worse, you’ve probably already noticed that when angry, your kids react like the adults around them. You may talk to your child, again and again, about how important it is for him to use his words, but if you throw things in anger and frustration, even on occasion, I guarantee that your child will begin throwing things in anger at some point too.

I want my boys to know that it is never OK to pepper a bully, or anyone else, with bullets or gunshot. I want them to know that violence is not the answer to bullying. But what messages are we really giving our sons regarding bullying and the need to defend and stand up for one’s self?

Startling, scary situations bring out all kind of voices. And after one shooting in California,  at least two disturbing videos surfaced. Both featured men who are vehemently opposed to gun control legislation. Both feature men who seem to view any gun control legislation as a form a bullying, designed to take rights away from individual Americans. And both videos ended with men threatening gun violence if such measures are passed. Conservative radio host Alex Jones told CNN host Piers Morgan that “1776 will commence!” Tactical Response CEO James Yeager said he’ll “be glad to fire the first shot,” and encourages other “patriots” to “load their mags” and make sure their “rifles are clean.” (Warning: Video includes graphic language.)

I want my boys, and yours, to learn that violence — and especially gun violence — is not an appropriate response to bullying. But we are living in a culture that subconsciously and overtly suggests that guns can solve problems. Is it any wonder that our boys are confused? That too many boys and men still reach for rifles and guns when they feel frustrated, abused or marginalized?

If we are truly to solve the problem of gun violence in this country, I think we need to look long and hard at our beliefs about violence, and about the right to stand up for one’s self. We need national dialogue and reflection, not fingerpointing.

I don’t have the answers. In fact, I fear I may be part of the problem. A while ago, I wrote a blog post in which I wrote, “I do not agree that bullied children should not be allowed to stand up for themselves…Walking away from a fight almost never engenders respect among other boys; instead, it marks the walker as an easy target.”

Today, I squirm when I read those words. I still believe them, mostly. I still believe that boys operate based on a hierarchy, and that refusing to acknowledge the ways in which boys think, act and respond leads to a lot of trouble. But more than anything — and more than ever — I believe that our boys need a bigger, brighter picture. They need to see men showing them healthy ways of solving conflict, instead of men threatening violence.

I know those men are out there. As a mom, I will support them, encourage them and continue, each and every day to talk about and model constructive problem solving.