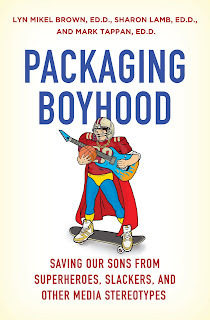 Like it or not, the media has a massive effect on today’s boys.
That’s why I was so excited to see Packaging Boyhood: Saving Our Sons from Superheroes, Slackers, and Other Media Stereotypes

, a new book by Lyn Mikel Brown, Sharon Lamb and Mark Tappan. Today, they share with us an excerpt about boys and drinking — and as a resident of Wisconsin, a state that consistently leads the nation in binge drinking, I agree that it’s high time we started paying attention to the unconscious messages we send our sons.

According to the National Survey on Drug Use and Health, males age 12 or older report higher rates than females for all measures of alcohol use and abuse, including binge drinking and alcohol dependence.

No wonder. The party-hardy atmosphere is everywhere they are – from about age 5 and up. We’re not talking about the ubiquitous beer commercials during Monday Night Football, the crazy liquored-up antics on VH-1 or MTV reality shows, or even the champagne drinking players in rap videos. We’re talking cartoons, G-rated films, and tween TV. Whether it’s the Poison Apple Pub in Shrek or the cool bar on the beach where the Madagascar friends hang out, socializing in animated films often means drinking.

And just like it is in real life, over-indulging leads to trouble-making and stupid behavior. Elliot the deer and Boog the bear, two buddies in the animated film Open Season, trash a country store after getting “drunk” on candy bars. Buzz Lightyear drinks too much “tea” in Toy Story, and his friend Woody tries to sober him up. In his movie, SpongeBob SquarePants has a terrible hangover from his ice-cream bender of the night before.

But why let the elementary school set have all the fun? Nothing says cool to a “tweenager” more than a good out of control party. TV shows targeting tweens help kids imagine being a mythic teenager; you know, the guy who has the hot babes and the fun parties, who hangs in clubs, dorms, and other places where there are no pesky, dopey, intrusive, nagging parents; the guy who has no homework or after school job and who doesn’t actually work hard at anything.

That’s why the boys in The Naked Brothers Band, a Nick show about a group of precocious preteens living the rock star dream, do their best to imitate the kinds of problems parents are trying to control. In their first movie, a mockumentary of their rock star rise to fame, then six-year-old bad boy drummer Alex develops a lemon-lime soda addiction. When their original band breaks up, he binges in a bar scene, chugging like a frat boy, and ends up in a luxury rehabilitation Soda-holics at Sea program.

Then there’s bad boy Zack on The Suite Life of Zack and Cody, a show about twin tweens living it up in a luxury hotel (the new version of the show has them living it up on a luxury cruise ship—more babes in bikinis!), who sets up his own underage dance club in the hotel lounge. The boy “bartender” pushes sugary soda to shy, nice girl, Barbara, and after chugging root beer – “Hit me again!” – she takes her hair down, whips off her glasses and starts dancing suggestively while the crowd shouts, “Go Barbara! Go Barbara!” It’s a nerdy boy’s dream when she staggers to Cody and kisses him hard on the mouth.

Most of these preteen shows feature 8-14 year olds running their own lives in a world created for them by adult writers who know how to create a pseudo-sanitized version of Entourage. All the themes, expectations, and desires are there—but it’s okay because the drinks they’re chugging aren’t really alcoholic and the come-ons and references to hot girls don’t really lead to the party-house bedroom. But there’s no missing the staggering around and slurred speech or the wild, loose behavior as anything but an imitation of the real thing.

So what’s a parent to do? Watch these shows and movies with your son. Help him understand what’s really being sold with those funny antics and silly situations, and discuss the behavior you see.

Here are a few “typical boy” behaviors to look out for in his media:

Koolaid or soda chugging in ways that suggest chugging a beer;
Doing “jello shots”, even when it’s just jello.
Getting crazy, acting goofy or doing stupid things after drinking sugary sodas or some other beverage.
Sharing woes or drowning troubles in a bar or saloon;
Living a party social life in clubs, dorms, or on the beach, chilling with sodas or drinks in beer mugs, champagne flutes, or cocktail glasses.

It will be nearly impossible to protect him from a “drinking is a rite of passage for boys” media message, so start these conversations early. Put his natural powers of observation to work, teach him to question advertising, and help him know when to say no to this version of “boys will be boys” behavior!

My oldest son wasn't yet two when Raising … END_OF_DOCUMENT_TOKEN_TO_BE_REPLACED

Raising my sons has always been a pleasure. … END_OF_DOCUMENT_TOKEN_TO_BE_REPLACED

None of us expected this pandemic, save maybe a … END_OF_DOCUMENT_TOKEN_TO_BE_REPLACED

My oldest son wasn't yet two when Raising Cain:Protecting the … END_OF_DOCUMENT_TOKEN_TO_BE_REPLACED

Twenty-six years ago, a beautiful baby boy inducted me into parenting. … END_OF_DOCUMENT_TOKEN_TO_BE_REPLACED

Raising my sons has always been a pleasure. I don’t know when … END_OF_DOCUMENT_TOKEN_TO_BE_REPLACED