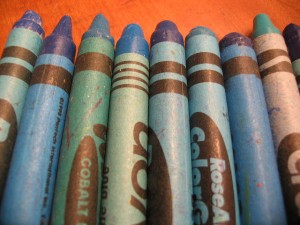 …but not on the walls.

Not that I have anything against blue walls, per say. It’s just blue CRAYON on walls that gets to me. Specifically, blue crayon on upstairs hallway walls after 9 pm at night.

I tucked my three- and six-year olds into bed at 8 pm last night. The three-year-old, however, was clearly not ready for sleep. I laid with him awhile, then headed downstairs to clean up the kitchen. I told him I’d be back soon to check on him.

While I was downstairs, I heard a mysterious “swooshing” sound upstairs. It sounded like Boy #2 rummaging his hand through the Lego bin, and considering that Boy #2 was up and creating is his room, that seemed like a plausible explanation. Occam’s razor, right?

The “swooshing” sound was my three-year-old, unleashing his artistic creativity all over the upstairs walls. And we’re not talking a little streak here, a straight line there. We’re talking serious scribbles. This boy clearly put some effort into this work. He touched virtually every single surface of the upstairs hall.

My three-year-old grinned at me. “Did you do this?” I asked. “I’m sorry,” he said. “What are you supposed to write on?” I asked. “Paper,” he said. “That’s right,” I said. “Crayons are for on paper, not walls. Tomorrow you’re going to help me clean this up.” Then I asked what was, to my mind, the most important question of the moment: “Where’s the crayon right now?” “In the garbage,” he said.

I led him back to bed, tucked him in again and mentally re-organized my to-do list. The walls would most certainly have to wait.

After a few minutes — and a promise to return soon to check on him — I headed downstairs to finish up the kitchen. Again, I heard a strange “swooshing” sound. I hurried upstairs — and found my 11-year-old son scrubbing the crayon off the walls.

My heart, which a few minutes before, felt defeated, swelled with love. It’s those moments — unexpected tender moments of love — which sustain parents and given us the strength to keep going. Those moments aren’t nearly as common as the blue-crayon-on-the-wall moments, but they’re the counterpoint that allows us to maintain some sense of balance. They’re the rests in a musical score gone crazy.

Despite me telling him he didn’t have to, Boy #1 scrubbed until all the crayon was gone. “It’s easier when it’s fresh,” he told me. “And blue is one of the easiest colors to get off. Red and black are the hardest.” Impressed by his knowledge, I asked him “How do you know?”

He smiled. “Don’t look in the back of my closet.”

None of us expected this pandemic, save maybe a … END_OF_DOCUMENT_TOKEN_TO_BE_REPLACED

You are not the only one who is overwhelmed by … END_OF_DOCUMENT_TOKEN_TO_BE_REPLACED

When it comes to safety, we can do much to support … END_OF_DOCUMENT_TOKEN_TO_BE_REPLACED

How are you talking about coronavirus with your … END_OF_DOCUMENT_TOKEN_TO_BE_REPLACED

None of us expected this pandemic, save maybe a few epidemiologists … END_OF_DOCUMENT_TOKEN_TO_BE_REPLACED

You are not the only one who is overwhelmed by homeschooling. I … END_OF_DOCUMENT_TOKEN_TO_BE_REPLACED