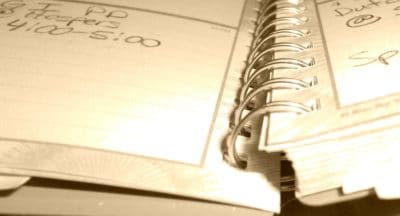 You’ve heard it before: Kids today are overscheduled. Between school and sports, church and community, there’s simply no time to just be.

Writer Laura Vanderkam disagrees. The author of the forthcoming book 168 Hours passionately argued her point in a recent Wall Street Journal article, The Myth of the Overscheduled Child.

Vanderkam argues that everyone has the same 168 hours a week. (7 X 24) By her calucations, a boy who sleeps 9 hours a night and attends school 30 hours per week still has 73 hours left. And according to data from the University of Maryland, homework usually only takes up another 5 hours. Sports, 4 hours. Other organizations, less than 1.5 hours.

Obviously, those are averages. Some boys do more; some do less. The point, Vanderkam says, is that our children are not grossly overscheduled.

I’m not entirely convinced of her point — and I was less convinced when I when read that she thinks moms have plenty of time in a day as well.

But one sentence made me think. Talking about the 40% of American children who are uninvolved in extracurricular activities, Vanderkam writes:

“Unfortunately, these young people tend not to fill their free time with the high-quality unstructured play that pundits praise. Many are at home, by themselves, watching TV…”

What do you think? Do you think boys are overscheduled? Or do you think they need more outside stimulation? Are too many of our boys frittering away their time?

None of us expected this pandemic, save maybe a … END_OF_DOCUMENT_TOKEN_TO_BE_REPLACED

You are not the only one who is overwhelmed by … END_OF_DOCUMENT_TOKEN_TO_BE_REPLACED

When it comes to safety, we can do much to support … END_OF_DOCUMENT_TOKEN_TO_BE_REPLACED

How are you talking about coronavirus with your … END_OF_DOCUMENT_TOKEN_TO_BE_REPLACED

None of us expected this pandemic, save maybe a few epidemiologists … END_OF_DOCUMENT_TOKEN_TO_BE_REPLACED

You are not the only one who is overwhelmed by homeschooling. I … END_OF_DOCUMENT_TOKEN_TO_BE_REPLACED