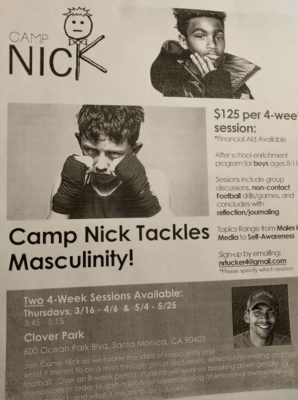 Masculinity and sexuality are not the same thing.

That statement seems so incredibly obvious to me — and perhaps to you too — but I’m compelled to state it, straight up, after reading this critique of a Santa Monica masculinity camp for boys:

“In Freudian terms, age 8 to 11 falls in the period of latency, where there’s no sexuality going on. So I’ve never heard of a ‘masculinity’ camp for boys this young. To be cultivating masculinity years before boys enter puberty sounds ridiculous to me.”

As described in the article, the camp “began in January after parents asked Tucker if he could develop a boys’ equivalent to the after-school programs they had for girls — like yoga and Girls on the Run.” Boys at the camp discuss and explore responsibility. (A common chant: “We do what we HAVE to do before we do what we WANT to do!”) They examine gender stereotypes and work on developing self-awareness. The camp includes physical activity, discussion and time to reflect.

And this is controversial?? “Ridiculous,” to some?

Nick Tucker, the founder of the camp, “says he chose this age range  because that’s when he says pack mentality sets in and boys begin changing their behavior to fit in. He’s seen it with boys in and out of the classroom.” The article quotes Tucker as saying:

“Third grade is a good time to start these conversations because they can begin to understand the concepts we’re talking about. My primary goal is to help them not conform based on what anyone else says and learn to be comfortable with themselves.”

Boys deal with cultural expectations of males from the time are they are born. (Seriously — there are psychological studies which show how boy babies and girl babies are treated differently by parents and others.) Our boys grow up surrounded by all kinds of messages about what boys and men should and should not do. And boys are wired to look to other males for guidance on the important question of how to be a man.

Creating spaces and opportunities for boys as young as 8 to wrestle with these questions, under the guidance and supervision of adult males, is a good thing. Bravo, Nick Tucker!

Would you send your son to a masculinity camp? Why or why not?

Teaching young boys about money is so important, … END_OF_DOCUMENT_TOKEN_TO_BE_REPLACED

You want what’s best for your boys. You want to … END_OF_DOCUMENT_TOKEN_TO_BE_REPLACED

Finding the right preschool and ensuring your son … END_OF_DOCUMENT_TOKEN_TO_BE_REPLACED

Teaching young boys about money is so important, but a lot of parents … END_OF_DOCUMENT_TOKEN_TO_BE_REPLACED

Pexels Raising boys isn’t always easy, but it's one of the most … END_OF_DOCUMENT_TOKEN_TO_BE_REPLACED

You want what’s best for your boys. You want to set them up with all … END_OF_DOCUMENT_TOKEN_TO_BE_REPLACED