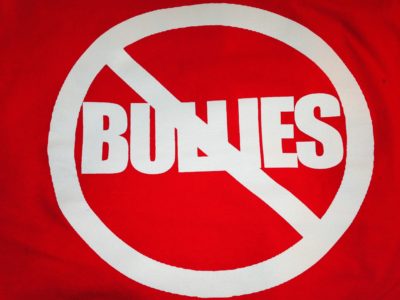 Kids continue to be bullied in school and elsewhere, and ignoring it or walking away often makes it worse. The boys I see in my practice who are bullied tell me, “I just deal with it. There’s nothing anyone can do…” It all happens so quickly. Teachers aren’t seeing it, or pretend to not see it, or they just let it slide if it’s over by the time they do notice.

But it is the teachers and bus drivers and cafeteria workers who can make a difference. The teacher who stops what she’s doing and asks the boy who looks like he just slammed dunked some kid what it was he said. If he says, “Nothing,” she says, “Then why do you look so uncomfortable and he (the kid who just got bullied) look so unhappy?”

The answer is not important. It’s the question that’s important, and her willingness to stop everything in the room in order to communicate, ‘I saw that, and it’s not cool, and I will hold you to account for it whether you acknowledge your actions or not. I don’t need consensus; I need to speak to the truth in the room.’ The bus driver who hears an ugly remark needs to STOP the bus and get out of his seat and turn to the group of kids who think they’re “all that” and say, “Of all the things you could say to another person, why in God’s name would you say that?” He won’t get an answer but that’s okay. It’s only the question that’s important, and the driver’s unwillingness to pretend he didn’t hear anything, or that it’s not his job to intervene.

Because it’s not about it being one’s job or not; it’s about taking the opportunity to let others know that IN YOUR PRESENCE, EVERYONE IS SAFE, and that you will have it no other way, and that you are not willing to avoid an uncomfortable situation for the sake of keeping a false peace.

It’s not at all about shaming or humiliating anyone; it’s a way of saying, “I see what’s happening, and will always stop it, and will wonder aloud how it ever came to be that hurting someone’s feelings became a source of recreation for you.”

We cannot continue our complacency with current anti-bullying programming that looks great on paper but does nothing for these kids who go to school every day enduring six hours of anxiety about when and where and from whom they can expect their next take-down.

Janet Sasson Edgette, Psy.D. is a child psychologist and the author of The Last Boys Picked: Helping Boys Who Don’t Play Sports Survive Bullies and Boyhood.

Teaching young boys about money is so important, … END_OF_DOCUMENT_TOKEN_TO_BE_REPLACED

You want what’s best for your boys. You want to … END_OF_DOCUMENT_TOKEN_TO_BE_REPLACED

Finding the right preschool and ensuring your son … END_OF_DOCUMENT_TOKEN_TO_BE_REPLACED

Teaching young boys about money is so important, but a lot of parents … END_OF_DOCUMENT_TOKEN_TO_BE_REPLACED

Pexels Raising boys isn’t always easy, but it's one of the most … END_OF_DOCUMENT_TOKEN_TO_BE_REPLACED

You want what’s best for your boys. You want to set them up with all … END_OF_DOCUMENT_TOKEN_TO_BE_REPLACED