So it’s almost time for your son to go to university. How time flies eh? After years of studying, it’s time for him to make the next step, flee the nest and try and earn a degree. 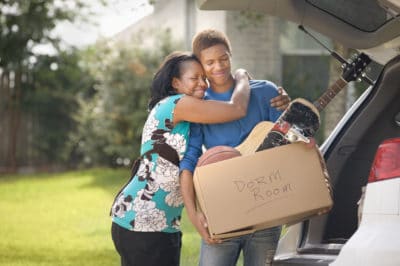 Mother hugging teenage son as he packs for college

It will be his first time living away from home and it’s important that you make this transition as easy as you can for him, as the first few days will be a big challenge. He will be thrown out of his comfort zone and will have to tend to his own washing, cleaning and cooking amongst other things. Teach him even simple tasks like how to use a washing machine. Make sure he takes a mental note and pack some washing powder in his suitcase. He will never think about buying it himself! You could also get him an easy to cook recipe book and get him to try one or two out in your kitchen. Warn against buying too many ready meals. Stress how he needs to be sensible with his money now that he’s going to be a student. You could also look through his finances and construct a weekly plan of what he can spend.

Go with him to the city where his university is and get him accustomed to the area. Hunt out the local amenities like a gym, a library for studying and the local park for those relaxing days. University is not just about work. It’s also about immersing yourself into the local culture. Earmark a cheap supermarket and buy some food for his new digs. Maybe a few beers to share with his new flatmates as well. That could be a great icebreaker which could lead to him settling down sooner at university than he expected.

Help him unpack his belongings on his first day and organise his room. Make sure you’re always available for his phone calls and skype chats, especially at the start of his new life. He will at times be sad and leave him asking what can be done with a degree, but comfort him and reassure him that these will be the best years of his life. Fight making the trip to go up to see him. He needs to be independent and stand on his own two feet. He can’t rely on you all the time. Ensure that you make a fuss of him at Christmas and in the summer holidays. He will certainly take advantage of a full food cupboard and your brand new washing machine when he’s home but take pity and a bit of pleasure in doing it again for him.

It’s going to be a difficult period for you too. It will be strange seeing your boy fly the nest and not being able to feel his presence around the house. You might feel lost at first but you have both got to adjust quickly. Times are moving on and you’ve just got to let him start living his life. 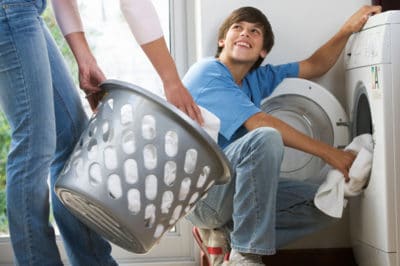 Teaching young boys about money is so important, … END_OF_DOCUMENT_TOKEN_TO_BE_REPLACED

You want what’s best for your boys. You want to … END_OF_DOCUMENT_TOKEN_TO_BE_REPLACED

Finding the right preschool and ensuring your son … END_OF_DOCUMENT_TOKEN_TO_BE_REPLACED

Teaching young boys about money is so important, but a lot of parents … END_OF_DOCUMENT_TOKEN_TO_BE_REPLACED

Pexels Raising boys isn’t always easy, but it's one of the most … END_OF_DOCUMENT_TOKEN_TO_BE_REPLACED

You want what’s best for your boys. You want to set them up with all … END_OF_DOCUMENT_TOKEN_TO_BE_REPLACED