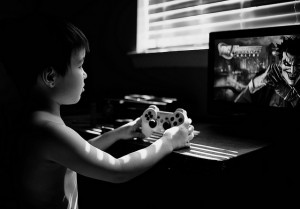 Many times parents will come up to me and say, “Warren, I don’t know what to do. I invite my son to dinner and he’s wrapped up in video games. He says he’s going to come in a minute and a minute turns into half an hour. We keep reminding him and saying that dinner is getting cold and he says, ‘Whatever, I’ll be right there. Don’t bother me in the middle of a game.’ And so it ends up that he doesn’t even come to dinner.”

The moment a mother or father says something like that I know what the problem is. The problem is the parents, because oftentimes parents don’t realize that they not only have the capacity to set boundaries but to enforce boundaries.

One family I dealt with had a boy named Glenn. They had that exact video/game supper problem. My advice was to work first with a psychologist and also a coach. The first thing he told them was that if their son didn’t come to dinner by a certain time dinner, they should clear the food off the table and have their son clean the dishes up. When they told him that, of course there was a huge, huge ruckus. So I advised the parents to say, okay, if this rule isn’t working, in addition to cleaning the dishes up afterwards, you have to appear a half hour before hand to help prepare the dinner. There was a super ruckus when they said that and tried to enforce it — huge fights, slamming doors and stuff like that. And so finally I said, Unplug the computer and take it and put it someplace where he can’t access. Make it unavailable to him. The parents initially said, We can’t do that, so I told them, Try it for a week – and also take away his cell phone privileges so he can’t make calls out. Let him deal with knowing that you’re in charge.

Long story short: the boy finally realized that the degree to which he didn’t heed what he needed to do, the degree to which he didn’t help with and clean up after dinner and come to dinner on time, is the degree of all the services that his parents were giving him —  taking him various places and giving him money for things, buying things for him, feeding him the foods that he liked, taking him out at certain times, certain places. All of those things can be withdrawn, but many parents don’t do that.

It’s amazing to me how many parents say, “My son won’t…”  — whatever they want him to do — as the son were the boss and the parents are the hopeful persuaders of the boss.

This happens with girls too, but girls have many fewer problems in this area. For example, when it comes to video games, on the average, boys play video games 13 hours a week. Girls play video games five hours a week. At the 5 to 9, 10 hours a week level, video game playing is actually very good for the brain. It has a hundred different positive values. But when you start getting to the 13 to 20 hours per week level of video gaming, what happens is the nucleus accumbens part of your brain releases dopamine, which stimulates motivation to win the game. Unfortunately, it blocks motivation in what is called the dorsolateral prefrontal cortex part of the brain, the part of the brain that is responsible for helping you translate things that you learn into real life experiences in the real world. So you then have a boy who’s really great at playing NFL Madden but he doesn’t want to go out and play team sports at all because it’s just too much bother.

The number one thing you can do to help your son is to trust that you know more than your child does. That’s why you are a parent and the child is a child. At the same time, don’t take it to the extreme and justify all your actions and decisions with because I’m the parent or because I said so. It really is important to share with the child what your reason is, why it’s in the best interest of the child and how you have his long-term interest at heart, so the child feels not just discipline but love and care. That’s really crucial.

Warren Farrell has been studying, speaking and writing about gender for a long time. He’s the author of The Myth of Male Power

and the chair of the Commission to Create a White House Council of Boys & Men. Dr. Farrell is deeply concerned about boys and currently authoring a book called Boys to Men with John Gray (yes, John Gray of Mars and Venus fame).

When you have a son, it’s important to build a … END_OF_DOCUMENT_TOKEN_TO_BE_REPLACED

DIY activities are one way to counterbalance … END_OF_DOCUMENT_TOKEN_TO_BE_REPLACED

Teaching young boys about money is so important, … END_OF_DOCUMENT_TOKEN_TO_BE_REPLACED

When you have a son, it’s important to build a beautiful, meaningful … END_OF_DOCUMENT_TOKEN_TO_BE_REPLACED

Parenting is stressful. Wonderful -- and stressful. As a parent, you … END_OF_DOCUMENT_TOKEN_TO_BE_REPLACED

DIY activities are one way to counterbalance screen time. And, boys … END_OF_DOCUMENT_TOKEN_TO_BE_REPLACED