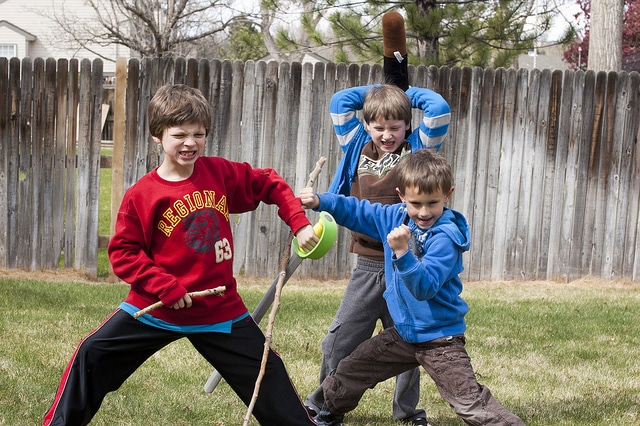 If you have boys at home, you know they’re built for battle. Whether you allow gun play or not, whether you own a TV or not, I’ll willing to bet that your boys have played some kind of war/cops-robbers/good guy-bad guy game — probably within the last 24 hours. But not all adults are comfortable […]

Lttle David Morales created a patriotic-themed hat — by gluing toy soldiers to a camouflage hat — for a school project. His hat did not go over well. The principal called the boy’s parents and told them that the hat wasn’t allowed in school. The reason? The toy soliders carry toy weapons, and school policy […]

Am I the only boy-mom who doesn’t swoon at the sight of little girls clothes? I know quite a few moms of boys who wish they’d had a daughter — not because they yearn for the mother-daughter bond but because they dreamed of dressing a little girl in cute frilly dresses. Like this mom. When […]

Please allow me to introduce fellow freelancer and homeschooler, Jan Udlock. Jan writes for a wide variety of magazines and homeschools her youngest three children (ages 10,13, 14; her oldest children are away at college). She lives with her family on a bit of acreage in the Pacific Northwest. Her vices include coffee, chocolate, anything […]

When I agreed to present a session on Homeschooling Boys at the Wisconsin Parents Association’s annual conference, I had no idea I’d be speaking to a room of almost 100 people. And yet there they were, bright-faced at 8:30 AM on a Saturday morning, ready to share their concerns, insights and comments. Ostensibly, I was […]

I started down the Path of Parenthood with few, if any, toys. We got a stuffed Tigger for our oldest son’s birth, but that was about it. Twelve years and four boys later, our toy room is a stereotypical boy haven. In one corner, Tonka trucks and farm toys. In another, wooden blocks and Lincoln […]

Our drive home from the orthodontist turned into an impromptu art class. For some inexplicable reason, Boy #3 brought along some modeling clay. He crafted a bullet out of his clay and showed it to his brothers, who promptly told him everything that was wrong with it (“it doesn’t even have a primer pan”). They, […]

Joyce Grant, of Getting Kids Reading, had a great post  about why boys don’t like school. She also wrote about boundaries. I love point # 7: Boys understand boundaries. Instead of saying, “no throwing snowballs,” make some boundaries. “Snowball throwing within this area only.” Boys get “inbounds vs. out-of-bounds.” And they’re good with it. We can’t […]