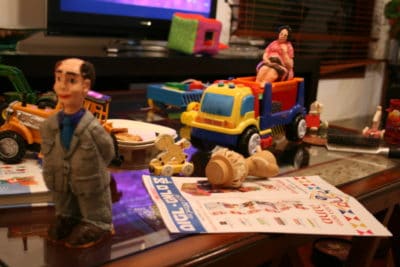 Are there blocks scattered about your living room? Random pieces of wood and nails on your garage floor?

Before you holler, take a deep breath and read this post. (I know — the odds of you having your computer in the garage with you at this very moment are slim to none, but bear with me.)

I occasionally teach a class for adults called  “Unleash Your Creativity.” It emphasizes the creative process, not the final product.  In my class, we don’t create masterpieces; we play. Literally. We color with crayons. We sculpt with playdough and modeling clay. And we create cards out of paper, fabric, wallpaper and glue.

The point is to take people back in time to a place where it was safe to create. As children, most of us had no problem whatsoever reeling off a story or drawing a picture. But ask most adults to write a story and they’ll say, “Oh. No. I’m not very good at that,” because somewhere along the line they’ve gotten the message that creativity is for talented people only. And that they’re not very talented.

In class, we’re learn that creativity takes time and space, and that it’s occasionally messy. (I’ve been known to spill gold glitter down the front of my shirt!) One day, our project  involved mounds of material. The center of each table was heaped with supplies: fabric scraps, sheets of wallpaper, cardstock, glue, scissors, glitter and more. It was colorful, chaotic and oh so creative.

At the end of class, my students asked whether they should help put the supplies away or leave them out for the mini-creativity classes I was teaching later that  night. I told them to leave them out. That’s when I learned about creative clutter.

One of my students, it turned out, was  a feng shui consultant. Earlier in the class, she agreed with me when I said that clutter can be a barrier to creativity. All of my students are women, and women, particularly, are prone to putting off creation when piles of “shoulds” surround them. But this clutter, she said, gesturing toward the colorful piles, was good clutter. This kind of “mess,” she said, invites creative energy.

Now think about the blocks on the living room floor. Or the wood and nails in the garage. Yes, it’s possible that your sons’ simply forgot to put things away. (Or that they left them there on purpose, hoping that the magic pick-up genie would appear.) But isn’t it also possible that they were interrupted in the middle of creation? That their creative energies were used up for the day, but that they’re not quite done with whatever burst of creativity they were experiencing?

When my boys are in the “zone” (and I can recognize the zone by their intense concentration and interest in a project), I let the mess linger. Case in point: cardboard boxes. Like many boys, mine are fascinated with large cardboard boxes. They’ve made clubhouses, snowmobiles, cars and rockets from boxes. Generally, the play takes more than one day. So I walk around boxes, markers and random cardboard shavings for days, ’til the boys’ interest moves onto something else.

Yes, it’s inconvenient. Yes, my house appears cluttered. No, my house will not be selected for a centerfold appearance in House Beautiful anytime in the near future. But that’s OK. I’d much rather have my boys experience the joy of creativity.

And if that doesn’t convince you to let the “mess” go, release responsibility to my feng shui consultant. She said it’s OK, so please let your boys create.

None of us expected this pandemic, save maybe a … END_OF_DOCUMENT_TOKEN_TO_BE_REPLACED

You are not the only one who is overwhelmed by … END_OF_DOCUMENT_TOKEN_TO_BE_REPLACED

When it comes to safety, we can do much to support … END_OF_DOCUMENT_TOKEN_TO_BE_REPLACED

How are you talking about coronavirus with your … END_OF_DOCUMENT_TOKEN_TO_BE_REPLACED

None of us expected this pandemic, save maybe a few epidemiologists … END_OF_DOCUMENT_TOKEN_TO_BE_REPLACED

You are not the only one who is overwhelmed by homeschooling. I … END_OF_DOCUMENT_TOKEN_TO_BE_REPLACED