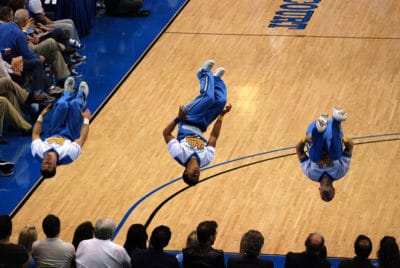 Equality is usually a world we hear in relationship to girls and women. The assumption is that boys and men have ruled the world for so long that there’s virtually nothing they can’t do.

Rigid role expectations still confine far too many boys (& men) to less-than-fulfilling lives. The Boy Code is still going strong, and boys who stray from the norms of standard male behavior risk being called queers and fags.

So it is with great pleasure that I introduce you to the Dazl Diamonds all-boys peewee cheer squad:

The boys from Leeds are believed to be Europe’s first all-male cheerleading squad. These young lads have looked the stereotypes square in the face and decided to do what they love, regardless of whether it’s a “girl thing” or a “boy thing.”

They’re getting healthy while they do it, too. DAZL is a community dance and health project designed, initially, to improve the mental and physical health of young women through dance activity in the disadvantaged communities of south Leeds.

According to their 2006-2007 annual report, “DAZL targets young people who lack access to positive activities or who are at risk of sedentary lifestyles and those not involved in regular sports activity. ” In other words: It’s OK if you’re not a jock. Just shake your groove thang.

Too many boys today are limited to football, basketball, baseball and soccer. Physical fitness, though, is much more than that. The key to long-term fitness is finding an activity you enjoy, because if you don’t enjoy you’re “chosen” sport or activity, you’re probably not going to keep it up for long.

So let’s expand our notions of what boys can do and support our sons, no matter what they choose.

Even if it involves pom-poms.

My oldest son wasn't yet two when Raising … END_OF_DOCUMENT_TOKEN_TO_BE_REPLACED

Raising my sons has always been a pleasure. … END_OF_DOCUMENT_TOKEN_TO_BE_REPLACED

None of us expected this pandemic, save maybe a … END_OF_DOCUMENT_TOKEN_TO_BE_REPLACED

My oldest son wasn't yet two when Raising Cain:Protecting the … END_OF_DOCUMENT_TOKEN_TO_BE_REPLACED

Twenty-six years ago, a beautiful baby boy inducted me into parenting. … END_OF_DOCUMENT_TOKEN_TO_BE_REPLACED

Raising my sons has always been a pleasure. I don’t know when … END_OF_DOCUMENT_TOKEN_TO_BE_REPLACED